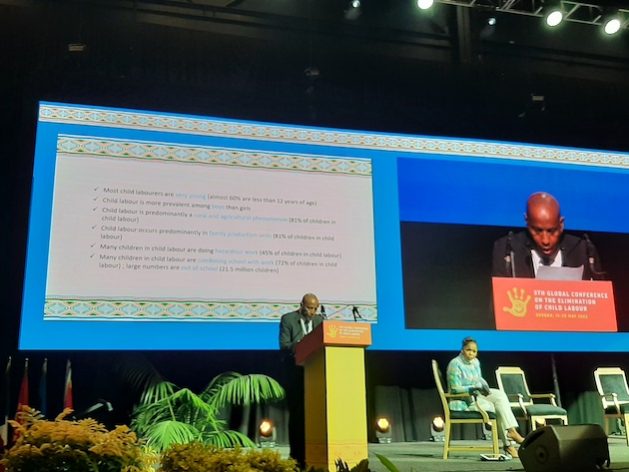 African Union Commission Department of Trade and Industry, head of industry Houssein Guedi highlighted how 92,2 million of the world’s children entrapped in child labour live in Africa, at the 5th Global Conference on the Elimination of Child Labour in Durban. Credit: Lyse Comins/IPS

Durban, May 17 2022 (IPS) – Global goals to eradicate child labour will not be achieved without a breakthrough in Africa, where most of the world’s 160 million children entrapped in child labour work in rural regions, mostly in agriculture with their families.

This is why the “Durban Call to Action” to eradicate child labour, spearheaded by the African Union (AU), the International Labour Organization (ILO), civil society organisations and other world leaders, is crucial and must be implemented by the countries on the continent.

Assistant Director-General and Regional Director for Africa of ILO Cynthia Samuel-Olonjuwon told delegates that the draft “Durban Call to Action”, expected to be finalised and formally adopted in the city on Friday, recognised the need to drive change in the world. She was speaking during a high-level panel discussion at the 5th Global Conference on the Elimination of Child Labour in Durban.

Samuel-Olonjuwon said the ILO had already supported the adoption and implementation of the African Union Ten Year Action Plan on Eradication of Child Labour, Forced Labour, Human Trafficking and Modern Slavery in Africa (2020-2030), which was the first plan of its kind in the world.

She said stakeholders engaged in the drive to eliminate child labour had developed the foundation of the draft “Durban Call to Action” when they met in Johannesburg to prepare for the conference in November 2021.

“The ILO will support the implementation of the Durban Call to Action in line with ILO conventions and the AU action plan on child labour,” Samuel-Olonjuwon said.

She said efforts needed to be coordinated across regions to be effective.

“Africa has shown that it is ready to drive the change to accelerate action to end child labour. We recognise there is still a long way to go, but we also know the commitment, understanding and the resolve to take action now, is widely shared. The need to act with urgency, especially for making progress on an annual basis, is also widely shared. We must coordinate our efforts, especially with those of us who are development partners, in close collaboration with the private sector, civil society and we as social partners and agencies,” she said.

African Union Commission Department of Trade and Industry, head of industry Houssein Guedi, highlighted the current status quo of child labour on the continent and the foundational points of the draft Durban Call to Action plan.

Some 45% of children in child labour are engaged in hazardous work. About 72% of children were combining school with work, although 32,2 million children of primary school-going age are not in school, despite a substantial improvement in access to education between 1990 and 2019.

Guedi said child labour often occurred in correlation with broader development challenges, such as in countries with high levels of informal employment, where populations received at least one social benefit, and a large percentage of the population is living below the poverty line.

He said there was now “unprecedented awareness, commitment and political will”, shown by a high level of ratifications on the continent and the implementation of policies and legislation to end child labour in recent years.

“We’ve seen some good practices emerging which could inspire Africa and the rest of the world,” Guedi said.

However, he added that there were still gaps in legislation, a lack of data for planning and weak enforcement, particularly in the agricultural sector and informal economy where child labour prevails.

“In Johannesburg, we discussed the importance of taking into account the salient features of child labour on the continent – young, rural, agriculture, family work, hazardous work, out of school/combining school and work – and key development challenges underlying child labour,” Guedi said.

He said stakeholders had agreed to actions which would form the basis of the Durban Call to Action.

These included the need to:

Focus on prevention and the root causes
Achieve impact at scale through adequately financing public policies and programmes
Focus on the most immediate major challenges and most actionable in terms of time frames for achieving results
Accelerate action to ensure quality universal education for all boys and girls
Expand social protection for workers in the informal economy and the agricultural sector
Secure decent work for adults
Focus on the school to work transition
Fill gaps in legislation for effective action against child labour, especially the worst forms
Take large scale action in agriculture and rural development
Develop measures to deal with child labour in conflict and crises
Increase financing for child labour activities
Mobilise political and social support to build momentum for accelerated action
Improve the availability of quality child labour data and research

Food and Agricultural Organisation (FAO) assistant director-general and Africa representative Abebe Haile Gabriel said the continent needed to mitigate the impact of the COVID-19 pandemic on food security, which had affected the most vulnerable families. He said the continent needed to promote mechanised agriculture to reduce reliance on children, expand social security to improve farmers’ resilience and provide free access to relevant education.

Ugandan Minister for Gender, Labour, and Social Development, Amongi Betty Ongom, said the pandemic had led to parents losing their jobs when economic sectors went into lockdown, many children had lost two years of schooling, and some had not returned due to a lack of affordability when schools eventually reopened.

“You find child labour in mining and in households – some are paid, but lowly paid, and others are completely unpaid, which is modern-day slavery. We have a test, each one of us, to ensure we end the scourge of child labour,”  Muchangam said.

“We have an obligation to eradicate child labour and to bring them up and give them the opportunity to learn and to play with their friends so they should grow up as decent human beings. The persistence of child labour undermines that, and it also contributes to destroying their lives. Let us join forces together to fight the scourge of child labour wherever we see it,” Muchangam said.