The effects could wipe out up to $113 billion in worldwide revenues this year, a trade group said, a new blow to the industry. 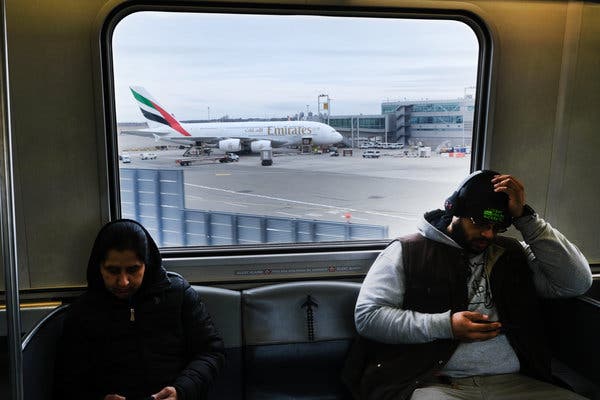 Kennedy International Airport. One business traveler said the lack of travelers had made his trip from Mexico to New York “a surreal experience.”Credit…Spencer Platt/Getty Images

By David Gelles and Niraj Chokshi

With the coronavirus outbreak continuing to spread around the globe, the aviation industry is being jolted.

Airline stocks dropped sharply on Thursday as investors reckoned with the prospect of canceled flights, lost sales and substantial reductions in service for months to come. Several carriers — including United Airlines, JetBlue and Lufthansa — announced new route closings in recent days. An industry trade group said the coronavirus could wipe out between $63 billion and $113 billion in worldwide airline revenues this year.

“There are dramatically fewer people flying this week than there were last week,” said Nicholas E. Calio, chief executive of Airlines for America, a trade organization. “Flights are being taken down because people aren’t getting on airplanes.”

The coronavirus has already sent stock markets into convulsions, rattled supply chains and forced companies to dust off emergency response plans. Stocks plunged again on Thursday, with the S&P 500 falling more than 3 percent. But the abrupt decline in global air travel suggests that the economic impacts of the outbreak may be entering a more disruptive phase.

David Clark, general manager of FreeWheel, an advertising company owned by Comcast, flew to Kennedy International Airport in New York on Thursday morning after attending a meeting in Cancun, Mexico. Mr. Clark, a regular business traveler, said that his flight was almost empty, and that both airports seemed quiet. He said he might not fly again for months.

“It was a surreal experience,” Mr. Clark said. “I was left wondering are the airlines going to be OK?”

It has been almost 20 years since the aviation industry faced such an existential threat. After the terrorist attacks of Sept. 11, 2001, global air travel plummeted, and it took years for airlines to fully recover. Today there are worries that the coronavirus could have a similarly disastrous impact.

“At the end of last week, we started seeing very sharp declines,” Gary Kelly, chief executive of Southwest Airlines, said on CNBC on Thursday. “It has a 9/11-like feel.”

The aviation industry was already grappling with the worldwide grounding of Boeing’s 737 Max, which has been out of service for a year after two deadly crashes. Losing that one plane sapped some airlines of expected growth, forced them to cancel thousands of flights and resulted in billions of dollars in losses.

The more fundamental issue posed by the coronavirus — that large swaths of the traveling public may simply stay off planes for the foreseeable future — is a far greater threat. Though still in its early stages, there are concerns that a prolonged disruption could do lasting economic damage. Commercial aviation, like the internet, is part of the connective tissue of the global economy.

“In little over two months, the industry’s prospects in much of the world have taken a dramatic turn for the worse,” said Alexandre de Juniac, head of the International Air Transport Association, which forecast the potential revenue drop of more than $100 billion. The rapid shift in fortune is “almost without precedent,” he said.

Around the world, there were signs that global air travel was increasingly grinding to a halt. On social media, travelers shared images of planes devoid of passengers. Others posted photos of empty airports and tarmac workers wearing full-body protective gear in major hubs like New Delhi, Zurich and Istanbul.

Kristi Faulkner, president of Womenkind, an advertising agency, said she was planning to attend Shoptalk, a major conference for retail brands, in Las Vegas. When the conference was canceled on Thursday, Ms. Faulkner tried to call Delta Air Lines, but a message informed her that there was a three-hour wait to speak to a representative. If she was not traveling in the next 72 hours, the message said, she should call back another day.

“How could they not be prepared for an onslaught of concerned travelers?” she asked. “The phone lines are jammed.”

Dolly Meckler, a social media strategist, flew from New York to Los Angeles on Wednesday after taking meetings and visiting family. “Half my flight was empty,” she said, noting that many passengers were using wipes to disinfect their seats. “A lot of us in the main cabin had our own rows.”

Airlines flew more than 4.3 billion passengers in 2018, up from fewer than half a billion two decades earlier, according to the International Civil Aviation Organization. In recent years, air travel has expanded at a relentless pace, especially in Asia.

“People need to be connected in person,” said Ian Bremmer, founder of Eurasia Group, a consultancy focused on the effects of globalization.

What’s more, airports support ecosystems of restaurants, stores, taxis and hotels that will all be affected if air travel remains depressed. European airports and related businesses support almost 12.5 million jobs, worth some $758 billion, according to the Economic Impact of European Airports study.

So far, it is too early to tell how severe, and how lasting, the damage to the industry will be.

As dire as the toll could be for global airlines, the industry in the United States is relatively well prepared for the outbreak. Consolidation has resulted in an industry with a smaller number of bigger companies, which have imposed greater financial discipline, built up cash reserves and found new ways to generate profit — like charging for bags — in the years since the financial crisis. On Wednesday, Mr. Trump and representatives of the business community dismissed the idea of the government’s providing financial support to the industry.

Mr. Bremmer said he believed that while the next few months were likely to bring more cancellations, air travel would rebound relatively quickly.

“People want to get back to shaking hands and meeting,” he said. “There’s way too much vested interest in keeping all these industries running.”

Still, the impact of the outbreak was increasingly obvious. Shares of American Airlines and United Airlines were both down 13 percent on Thursday.

United said on Wednesday that it would reduce its international schedule by 20 percent in April and was planning similar reductions in May. It also said it was paring back its domestic schedule as well.

JetBlue, which mostly flies in the United States, said it would reduce service temporarily by about 5 percent. Both airlines also announced moves like hiring freezes that were intended to shore up cash.

Lufthansa Group, whose airlines include Lufthansa German Airlines, Swiss Air and Austrian Airlines, began widespread reductions in service that would cut capacity by about 25 percent.

And in a securities filing on Thursday, Southwest Airlines, which offers virtually no international service, said that while its revenue increases in the first two months of the year had been “healthy,” its position had changed in recent days.

“It wasn’t until literally about a week ago that we saw a drop in our bookings, year over year,” Mr. Kelly said at an industry conference. “So, yeah, it’s manifested quickly.”