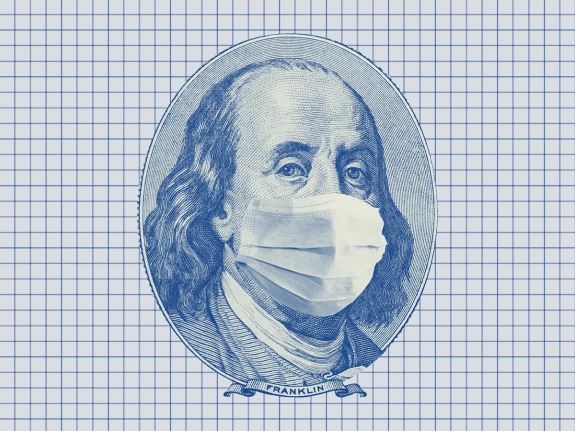 Earlier this week, President Trump said he is considering taking steps to roll back restrictions that businesses and state governments have put in place to contain the coronavirus. Citing the economic impact of measures like social distancing, Trump floated Easter Sunday as the date he’d like the nation back at work.

Already, 9 percent of Americans say they’ve been laid off from work due to the coronavirus and another 20 percent say a family member has been laid off in a recent Economist/YouGov poll. And a record-breaking 3.3 million unemployment insurance claims were filed last week. Many economists now fear a full-fledged recession. But at the same time, public health officials caution that social distancing is crucial to stopping the spread of the coronavirus, and if we move too quickly to relax restrictions, the economic consequences could be even more devastating.

An overwhelming majority of Americans are really concerned about the economy. Last week, Nathaniel Rakich found signs that concern was growing — in one poll, as many as 84 percent of Americans said they were concerned about the impact the coronavirus would have on the economy. And concern has continued to grow. A Morning Consult poll conducted between March 20 and March 22 found that 90 percent of Americans said they were “very” or “somewhat” concerned that the coronavirus would impact the economy, marking a 6-point increase from the week before. Americans are also worried about job security — 49 percent said they were worried about losing their job, according to an Economist/YouGov survey conducted between March 22 and March 24. 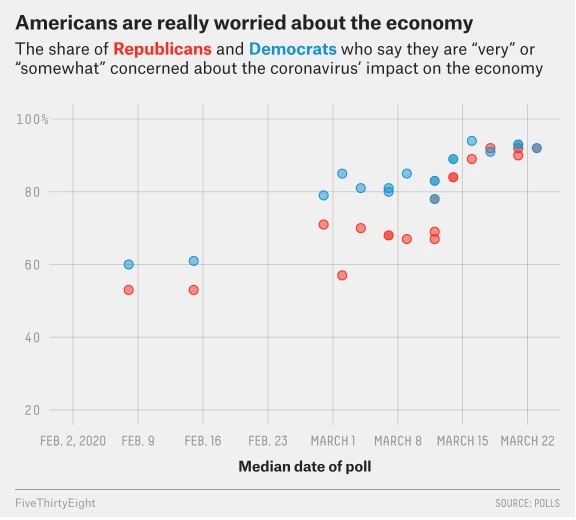 This is different from the partisan split we found earlier in March between the share of Democrats and Republicans who said they were worried that they or someone they know will contract COVID-19. However, as you can see in the chart below, the gap between Republicans and Democrats has narrowed as more Americans report that they are concerned. 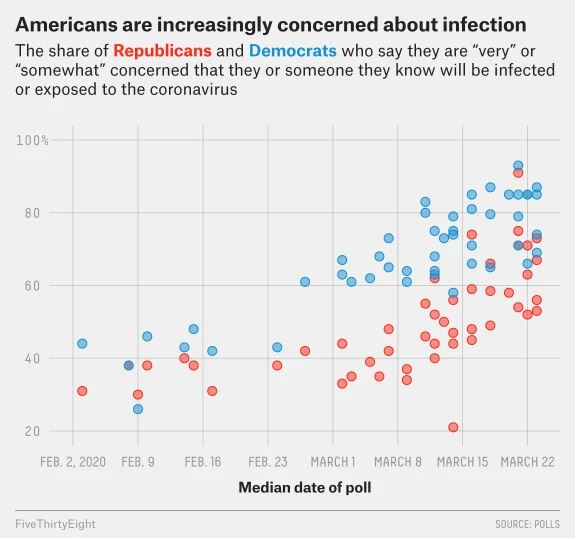 For instance, a March 22-24 Economist/YouGov poll found that 64 percent of Americans said they were “very” or “somewhat” worried about personally experiencing the coronavirus. This marked an 8-point jump from the March 15-17 Economist/YouGov survey. The share of Republicans who said they are concerned rose 11 points, from 45 percent to 56 percent. The share of Democrats who said they are concerned increased 3 points, from 71 percent to 74 percent.

Four other polls released this week found that more than three-fifths of Americans were either very or somewhat concerned that they or someone close to them would get or be exposed to the disease: Harris Poll (76 percent), SurveyMonkey/Fortune (76 percent), CBS/YouGov (71 percent) and Global Strategy Group/GBAO/Navigator (79 percent).

The fact that more Americans are worried about the effect of the coronavirus on the economy than about their own health may put pressure on politicians to kickstart the economy, making it harder for public health officials to push for preventive measures like social distancing.

But Dr. Howard Koh, a professor at the Harvard T. H. Chan School of Public Health, warned that the response to the coronavirus is complicated by the level of uncertainty that still exists around the virus’ spread.

“We are hampered because the data we are using to track this pandemic right now is still incomplete. It’s better than it was several weeks ago, but we’re still not in a place where everyone agrees,” said Koh.

The U.S. was late to ramp up testing, only starting at the beginning of March, which means we don’t yet have complete information on who is infected or the rate at which the virus is spreading. According to a weekly survey of infectious disease researchers across the U.S., many experts agree the situation has worsened in the last few days, but there is still a wide range in the projected number of expected cases and deaths.

Koh said that we have to reach the point where we better understand the spread of the coronavirus before we can send people back into the workforce. Otherwise, we risk overwhelming hospitals and the health care workforce capacity, perhaps leading to even more economic hardship.

57 percent of Americans estimate they have lost at least some money as a result of the coronavirus, whether that’s from stock market losses, lost wages, money spent on nonrefundable travel or events, or something else, according to a YouGov poll conducted March 25. A plurality of people who lost money said they lost more than $1,500 — 27 percent of all respondents fell into this group. However, 28 percent reported that they hadn’t lost any money.
According to a March 21-24 Global Strategy Group/GBAO/Navigator poll, nearly three-quarters of Americans think the worst is yet to come when it comes to the coronavirus.
In a recent Business Insider/SurveyMonkey survey, respondents were asked when they thought the coronavirus situation would be over (i.e., when schools, restaurants and businesses would be reopened). Overall, 72 percent said sometime between April 1 and July 1, with the median response falling on June 2, 67 days from now. The median response among Democrats was 91 days from the time the poll was taken (June 24), while Republicans were a bit more optimistic, with a median response of 62 days (May 26).
Last week, it was reported that Sens. Richard Burr and Kelly Loeffler sold stocks worth millions of dollars after receiving information about the coronavirus epidemic. In an Economist/YouGov poll conducted between March 22 and March 24, 69 percent of registered voters, including 68 percent of Democrats and 59 percent of Republicans, said senators who sold stocks after receiving briefings on the coronavirus should resign.
In the most recent Democratic presidential primary debate, former Vice President Joe Biden said he’d choose a female running mate if he won the Democratic nomination. In that same Economist/YouGov survey, 80 percent of Democratic primary voters said they approve of Biden’s decision. The pollster also asked those voters who they think should be selected as Biden’s running mate: 27 percent said Sen. Elizabeth Warren, 18 percent said Sen. Kamala Harris, 13 percent said Sen. Bernie Sanders and 10 percent said Sen. Amy Klobuchar. 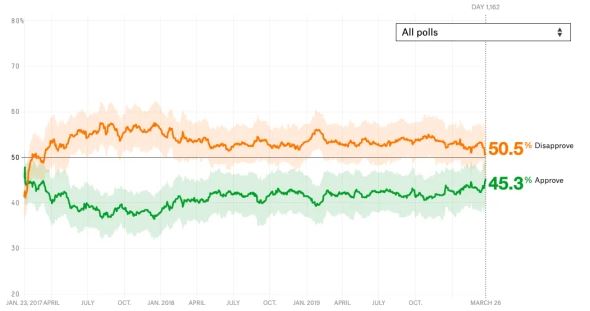 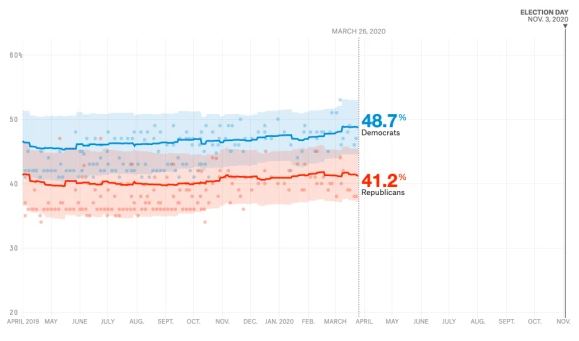