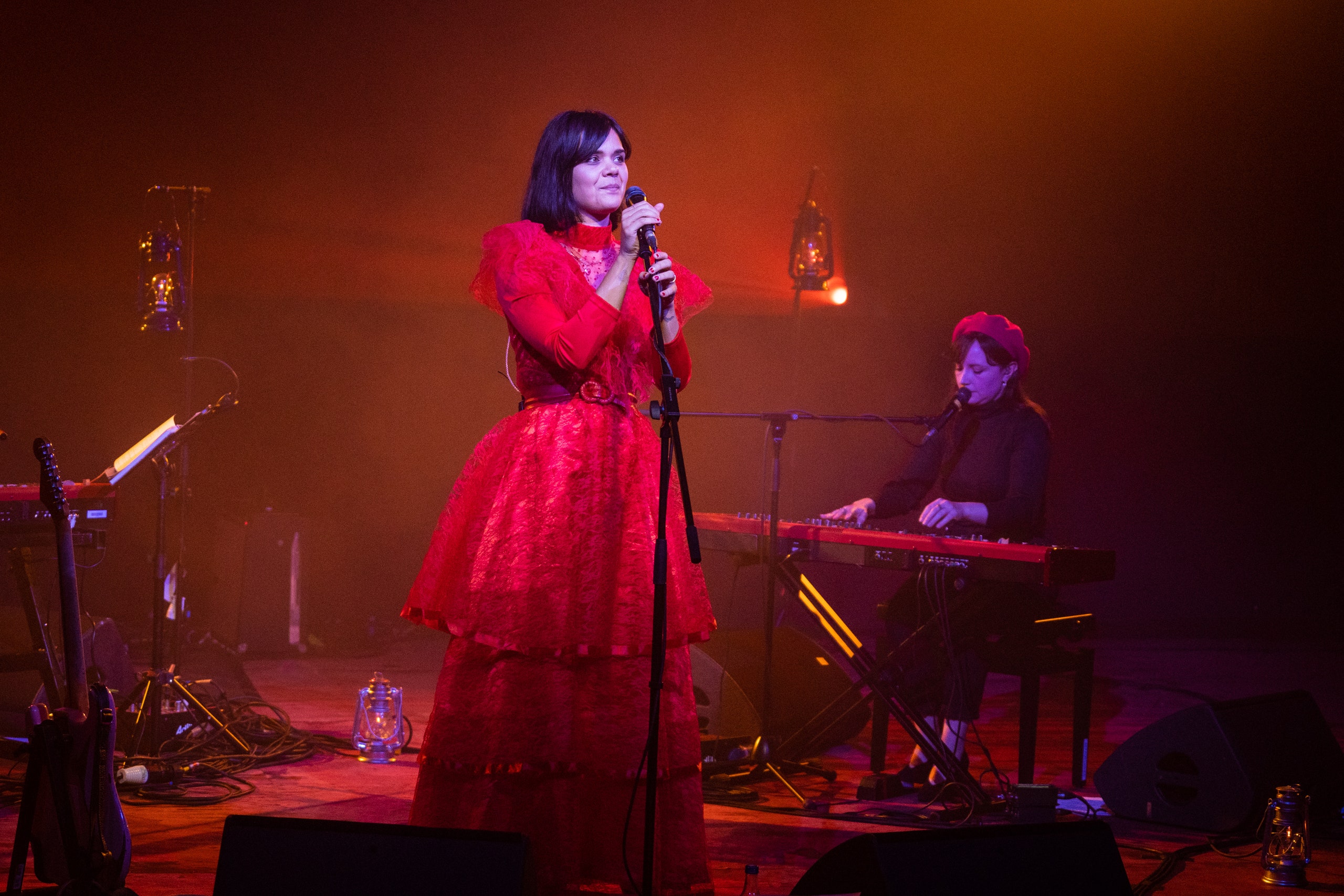 Natasha Khan, 2019.Photo: Lorne Thomson / Redferns
Most of us have five senses. Natasha Khan, who performs as Bat for Lashes, has at least six. She seems to possess an otherworldly sense of what is happening beneath the surface of things. While it’s always been clear that the artist—who is currently touring with her latest EP, Lost Girls—has an instinct for fashion, when she appeared onstage at Town Hall in New York in a bright red dress, it seemed as if she had poached a look straight off a fall 2020 runway. High-necked, ruffled, and tiered, the lacy number was part lady, part Vampira, and it had bite.

Rather topically, given the upcoming Met Gala and the collections it inspired this season, it was also time-traveling. When Khan sat at her piano she looked like a proper Victorian playing spinnet, but also à la mode. A scroll through Khan’s Instagram account revealed that in choosing the dress she was shopping her own closet. She ordered the dress from an online Halloween shop when she and her boyfriend dressed like Tim Burton’s Lydia and Beetlejuice last year. “When I wore it, I just felt so powerful and so cool,” says Khan. “I think it just kind of unleashes something.” 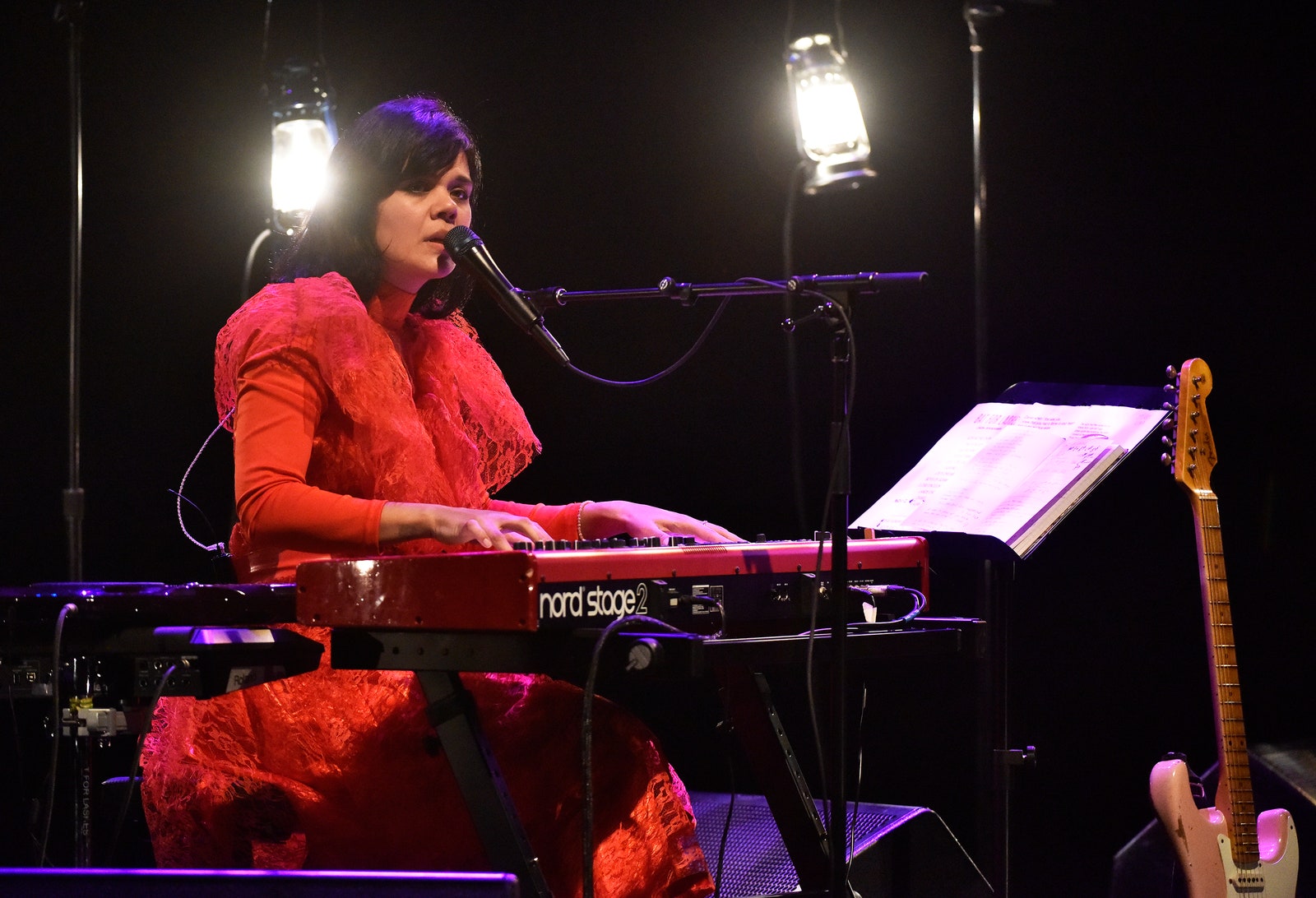 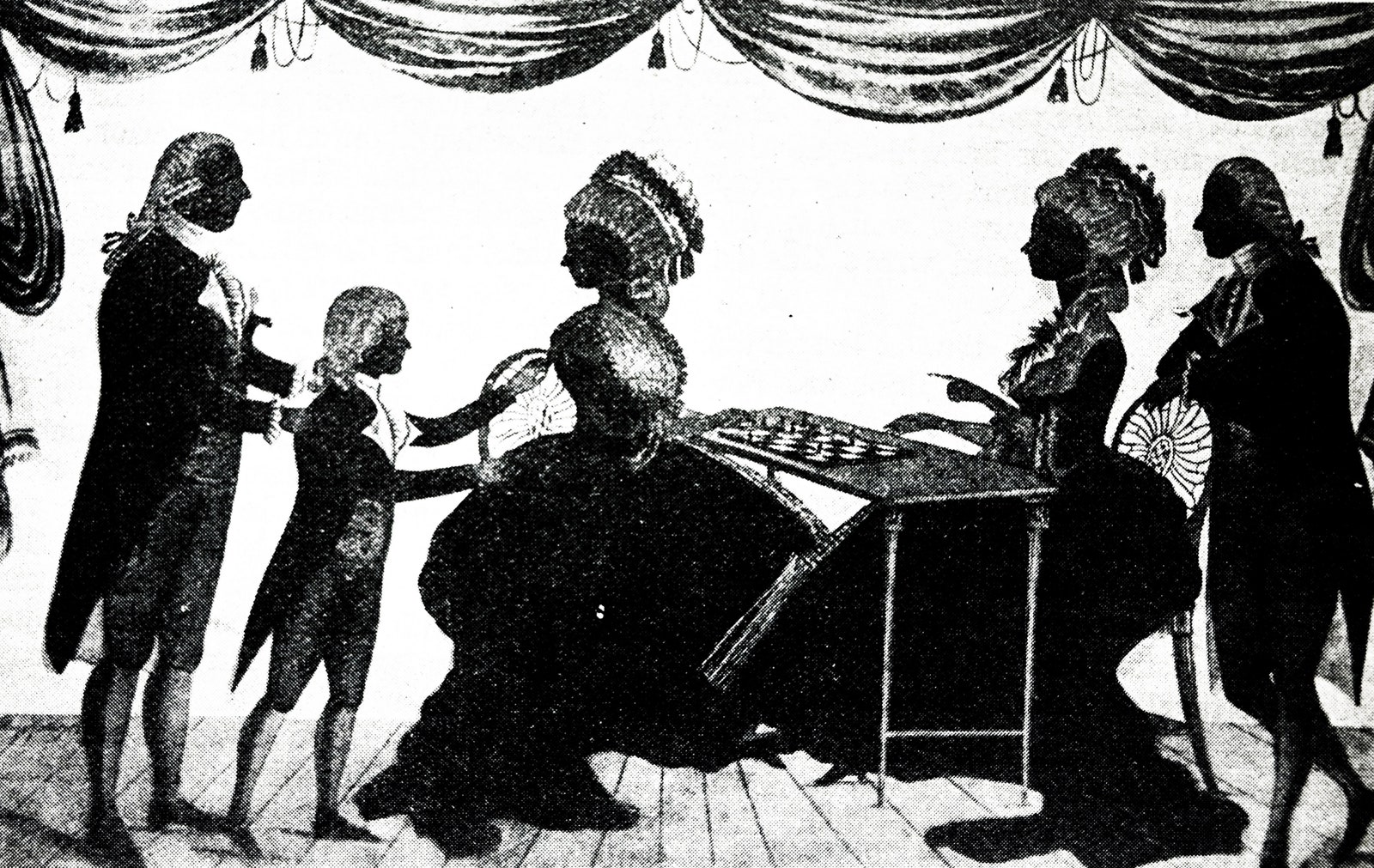 Engraving of Jane Austen’s father introducing one of his children to friends, 1788. Photo: Photo 12 / Universal Images Group via Getty Images

Khan reminds us of the power of fantastical fashions to lift us up from the shadows or act as a kind of soft armor. Certainly the fall 2020 season offered options for cautionary realists (Balenciaga, Prada, Marine Serre) and dreamers (Rodarte, JW Anderson, Gucci). It’s often in the collision of opposites, that magic appears in fashion. Likewise in Khan’s work. “There’s always something nice about two kind of opposing forces coming together and the friction that creates. I think [for me] that probably innately and deeply comes from the fact that my dad’s from Pakistan and my mum’s English; that mix of two very different cultures.”

A crafter of what she describes as “happy sad songs,” Khan will often combine her gothic lyrics with the sweet tinkling sound of a music-box-style melody. “I think if I’m going to talk about a really sad subject matter, I generally like to sort of weave it into a musical place that feels safe and room-like—or just magically transportative it in some way—because then I think you kind weave a spell where you can get into people’s deeper psyches. [You can] talk about [a subject] that’s quite deep, but at the same time you’re musically kind of lulling them with a lullaby.”

First off, tell us about that red dress you are wearing on tour.

It has a really funny story: It’s actually my Halloween costume (and my birthday costume too), because me and my boyfriend dressed up as Lydia and Beetlejuice. So the dress is based on Winona Ryder’s red wedding dress from [the movie]. It was just super comfortable and it didn’t cost an arm and a leg. I was like, this is great; I don’t just want to wear this once. I had some other ideas, but nothing was really grabbing me. If I hadn’t used that dress, I might’ve tried to have Susie Cave, the Vampire’s Wife designer, make me something. She seems like, you know, one of the sisters. [My look] was going to be in that vein. I just ordered [this dress] online on a Halloween site. It’s a very Victorian Gothic dress, but then it’s like bright red. I like the Tim Burton reference; he loves Gothic stuff so much, but there’s this kind of tacky aspect. 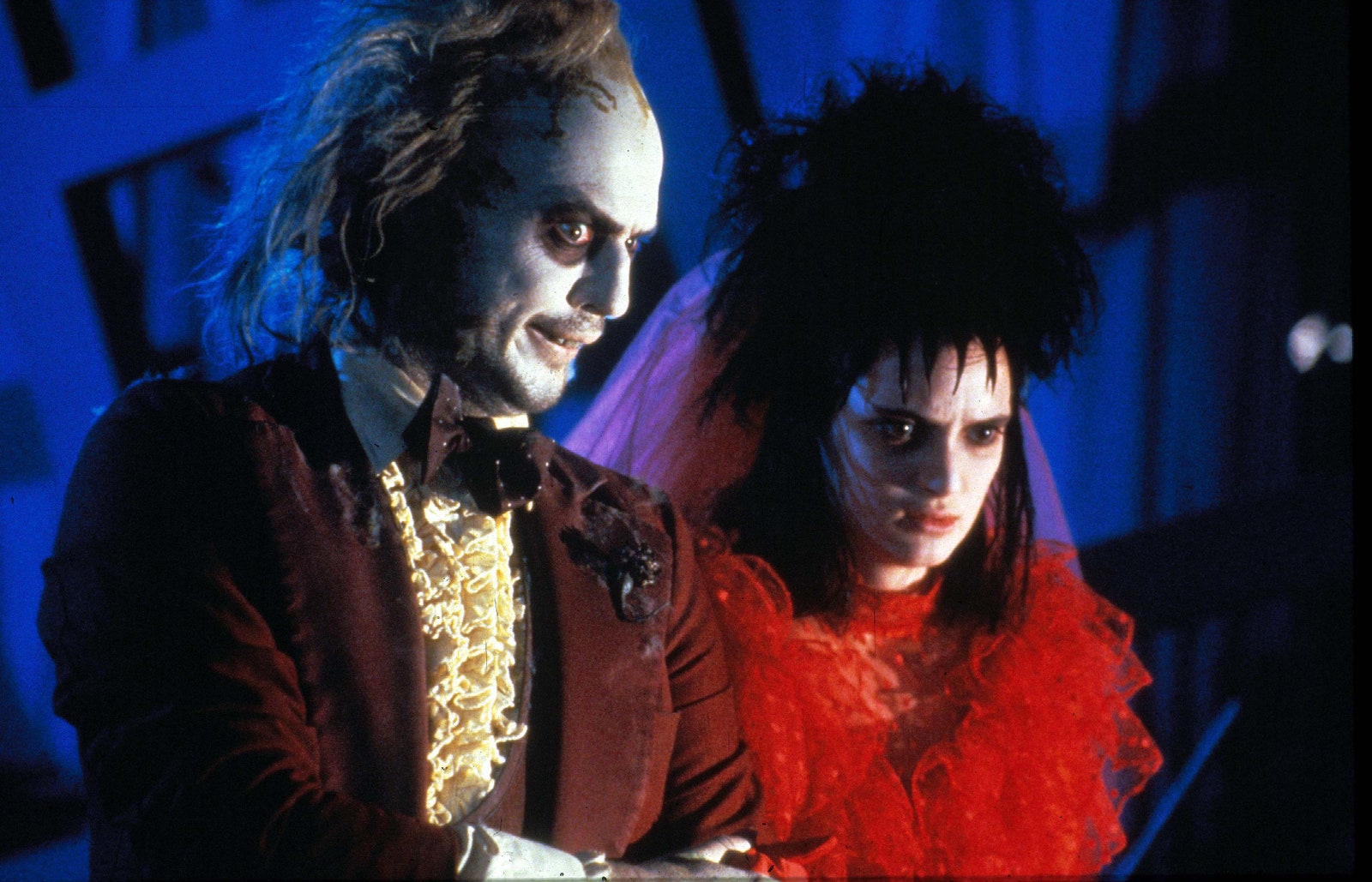 Have you always been into the idea of vampires?
Definitely, I mean I was born six days before Halloween. I think I kind of love most the ’80s [vampire ideal] because it had a sort of a tongue-in-cheek black comedy aspect to it which I think is cool. I do really love the original gothic vampire look, but I think my angle on it [for this album] was combining that with [my study of] Mexican girl gangs that used to be around Echo Park and all these areas. I was doing a lot of research on that, so [my look] turned into this hybrid of 1980s-inspired fashion with more sort of urban fashion, and wondering what that would be like if it had a sort of vampirical twist. The fashion aspect of every album is always really important. [I’ve always] tried to combine these sort of underground, more punk, DIY things with high fashion or art to create a third thing that is my own take on stuff.

Who is Nikki Pink, the alter-ego you created for this album?
Well, Nikki comes to L.A. and she is kind of possessed or abducted by the Lost Girls and in that process she becomes a vampire. The story of the Lost Girls is that they’re a group of ancient female witches [that represent] all the powerful and shadow aspects of ourselves that we tend to sort of push away. The Lost Girls are all aspects of Nikki. In the story, they pose as vampires in the city, but when they go out back to the desert where they come from they return to their former goddess selves. So Nikki is part vampire, but she’s really just an amalgamation of all of those dark aspects of the feminine.

The timing of your album is perfect in terms of what’s happening in pop culture and fashion. Why do you think there’s such interest in the gothic right now?
I think these myths and archetypes keep resurrecting in society when things get really dark. When people feel lost and overwhelmed there’s often a resurgence of these types of mythical characters. It’s a cathartic way for us all to explore those dark shadows. And then because it’s music, fashion, or film, we kind of sex up the pop culture aspect. Like David Bowie would take some really obscure avant garde things and make them accessible to people. I think that’s all part of the healing of society and how we all intricately kind of connect to each other.

You seem to have a sixth sense of fashion; that dress struck me as being very on-trend.
I wouldn’t know it’s on-trend because I don’t really follow fashion down to like what’s happening now. But I always can feel [what’s coming] in my wardrobe; usually about three years before the thing happens. I’ll get twinges of inspiration: you start to pick up imagery and you start to see in weird little bookshops that someone’s done a book on the occult or like these weird pagan male groups that lived in Cornwall. As an artist, I think it’s kind of your job to start sniffing. You feel things rising from the very bottom. [It might take three years to make an album] and by the time it’s finished, it has kind of gone into the mainstream. All the fashion designers have probably been feeling the same thing, but it takes that amount of time to feed and then flourish. So [being on trend] doesn’t feel surprising to me; I knew it was coming ages ago. It always feels that way, which is a good thing because it means you’re on the right path.

What is the role of fantasy in your work?
I realized the power of storytelling quite early on. I just loved fantasy books and books about witches and ghosts. And coming from England, there’s a lot of folklore and mythology, and sort of pagan stuff that you learn about, too. So many people believe in fairies and I was definitely a child that immersed myself in all of that. The best stories to me are ones that use fantasy to heighten reality, and have an aspect of escapism to them. Sometimes we just want to be elevated into a realm that’s almost religious so that we can access deeper parts of ourselves. I think that’s why religion and scriptures and all those things have lasted for thousands of years. I think we don’t realize how adept we are at understanding metaphors, symbols, and characters. We need that dialogue with ourselves and with each other.