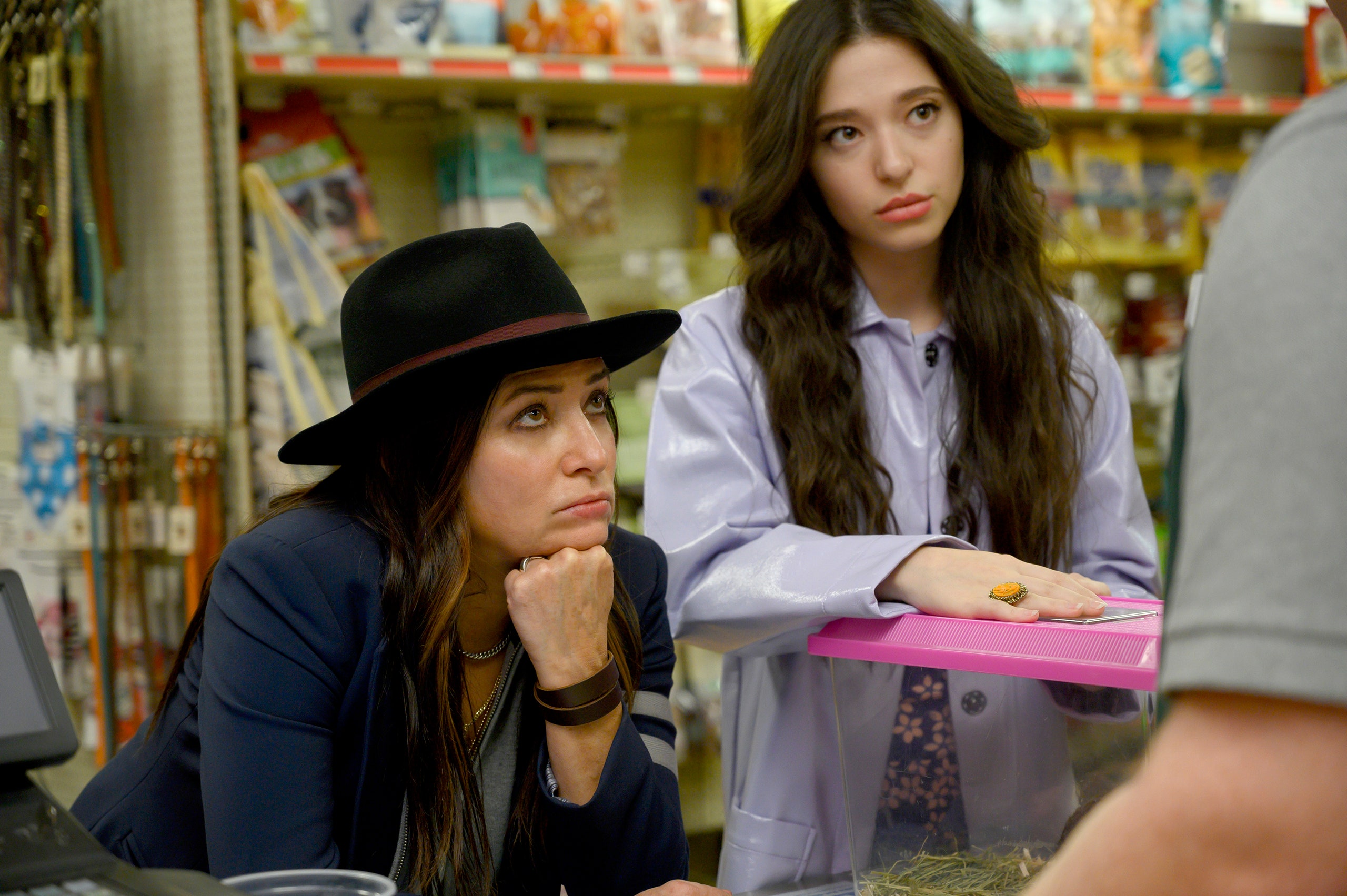 Pamela Adlon as Sam Fox and Mikey Madison as Max. Credit: Suzanne Tenner/FX
In the final episode of the fourth season of Better Things, Sam Fox, the hustling, heart-of-gold mother and Los Angeles actor played by Pamela Adlon, raises her arms to the skies and cries out, “I accept!” Her friends, a gay, soon-to-be-newlywed couple have been turned away from a restaurant where they had hoped to host their pre-wedding brunch, and while the establishment’s dress code is cited as the reason, suspicions of homophobia have tainted the celebration. But Sam pushes them toward the nearest shop with a set of skinny ties, refusing to let it ruin the day. The posture is fleeting, but emblematic: I see your challenge, she cries to the universe, and I’ll meet it.

Such pivots are common in Better Things, a show that is a comedy and a drama, a family farce and a poetic meditation on modern life, a show about nothing and everything—all in rapid succession. I’ve written about how Better Things, which returns today, defies genre categorization, and this season stretches the boundaries even further: A moody montage of rainy L.A. feels more like the opening of an art house film than a 30-minute comedy. But more often the show’s elusiveness comes from these about-face transitions. As soon as it establishes a tone of melancholy, it pokes fun; when it’s veering too close to a romp, it reminds you of mortality or age or pain.

These leaps are less philosophical than tangible, grounded in the quotidian interactions that give this show its undeniably authentic texture. In one scene, Sam’s middle daughter, Frankie, shows her mother an uncharacteristic degree of vulnerability, admitting that she missed her after a trip. “You did?” Sam asks, incredulous. “Eww, Mom. Don’t,” Frankie says. In another episode, as Sam’s oldest daughter, Max, prepares for her hostessing job, she elevates a game of competitive who-has-it-harder when it comes to being a working woman. (“I have to be on my feet all night,” she informs her mother. “It’s not like some movie set.”) The tempers simmer, then boil; the c-word is tossed back and forth like a torpedo that isn’t quite hitting its mark. In another, lesser, show, Max would storm out, then move out, and Sam would slam the door behind her. In this one, they break into giggles.

Better Things has been remarkably assured since the beginning, and it has maintained a tonal consistency amid its ups and downs. If there is a dramatic arc to the show, it has been strangely external to its contents. When, before the start of season three, the show’s cocreator, Louis C.K., was asked to leave because of sexual misconduct allegations, the show had to respond—implicitly, if not explicitly—to his departure. If last season was in part about establishing the show’s bona fides without C.K., this season feels like it dispenses with any need to even reference him. There are plenty of men in Better Things (though it should be said that most of the straight ones don’t fare so well). This is a show that is gloriously about about women, and Adlon’s character in particular: a pendulum swinging cheerfully between her id, ego, and superego.

But while Better Things is an unfiltered projection of one woman’s mind, the show is also making a more nuanced argument, saying that no woman can really allow those Freudian forces to romp freely. There will always be some part of her that is tending to the needs of others. Sam’s mind, money, and body are given, sometimes with resentment but mostly with love, to her daughters, her aging mother, her friends. In an early scene, there’s an anonymous body lying curled up in a fetal position on her bed—sick or heartbroken, it’s not clear—but the assumption is that Sam is there to take care of whatever ails it. The demands on Sam are endless—no season would be complete without a plumbing problem that drip, drip, drips, solely on Sam’s shoulders. (This season, it’s the garbage disposal, but also the leaking roof…and she has to take Frankie to the gynecologist for the first time.)

So it’s no surprise that Sam lashes out—or does she? “Welcome to my midlife crisis!” she cries at one point in this season, with the kind of balls-out swagger one might associate with someone happily exiting a Vegas casino. She’s just bought a highly impractical car and there’s a snake around her shoulders. That snake might seem like an accessory for an unleashed Eve, but I think we’re meant to read it as another obligation—an addition to the overstuffed menagerie that is her house with all its dogs, raging teenagers, and lovesick friends. (When Frankie declutters her walls and paints them a geometry of slate gray and white, you have to sympathize with her desire to create some Kondoed order in her environment.)

Better Things is a show that mimics its aesthetic: exuberant and a little disorganized. But don’t mistake the chaos for a lack of rigor or design. This season deftly picks up on certain threads of earlier seasons. The hand brace that was worn but never explained is finally addressed—it’s a rare show that can turn orthopedics into suspense. And larger, more portentous declarations that seem to have been discarded are revived, not so much to provide some kind of conclusion, but to indicate that life is long and that resolution doesn’t necessarily result from the longevity; sometimes the threads just become more tangled. Bless this show for its beautiful mess.