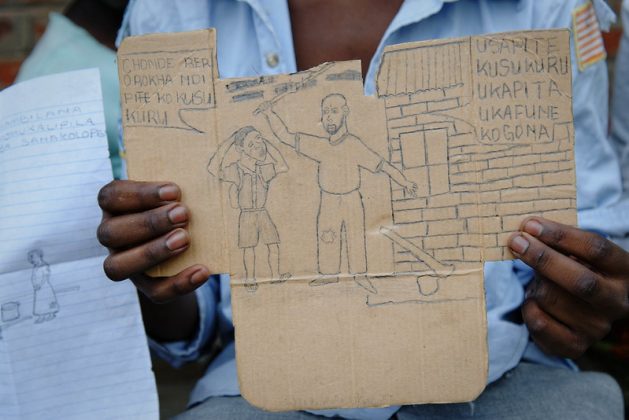 A child beneficiary holding a drawing portraying domestic violence, at the Centre for Youth Empowerment and Civic Education, Lilongwe, Malawi which partnered with the ILO/IPEC to support the national action plan aimed at combating child labour. Credit: Marcel Crozet/ILO

Nairobi, May 13 2022 (IPS) – Children washing clothes in rivers, begging on the streets, hawking, walking for kilometres in search of water and firewood, their tiny hands competing with older, experienced hands to pick coffee or tea, or as child soldiers are familiar sights in Africa and Asia.

Child rights experts at Kailash Satyarthi Children’s Foundation reiterate that tolerance and normalisation of working children, many of whom work in hazardous conditions and circumstances, and apathy has stalled progress towards the elimination of child labour.

Further warnings include more children in labour across the sub-Saharan Africa region than the rest of the world combined. The continent now falls far behind the collective commitment to end all forms of child labour by 2025.

“There are multiple drivers of child labour in Africa, and many of them are interconnected,” Minoru Ogasawara, Chief Technical Advisor for the Accelerating action for the elimination of child labour in supply chains in Africa (ACCEL Africa) at the International Labour Organization (ILO) tells IPS.

He speaks of the high prevalence of children working in agriculture, closely linked to poverty and family survival strategies.

Rapid population growth, Ogasawara says, has placed significant pressure on public budgets to maintain or increase the level of services required to fight child labour, such as education and social protection.

“Hence the call to substantially increase funding through official development assistance (ODA), national budgets and contributions from the private sector targeting child labour and its root causes,” he observes.

UNICEF says approximately 12 percent of children aged 5 to 14 years are involved in child labour – at the cost of their childhood, education, and future.

Of the 160 million child labourers worldwide, more than half are in sub-Saharan Africa, and 53 million are not in school – amounting to 28 % aged five to 11 and another 35 % aged 12 to 14, according to the most recent child labour global estimates by UNICEF and ILO.

Against this grim backdrop, keynote speakers Nobel Peace Laureates Kailash Satyarthi and Leymah Gbowee and former Prime Minister of Sweden Stefan Löfven will address the conference, which is expected to put into perspective how and why children still suffer some of the worst, most severe forms of child labour such as bonded labour, domestic servitude, child soldiers, drug trafficking and commercial sexual exploitation.

Satyarthi has been at the forefront of mobilising global support to this effect.

“I am working in collaboration with a number of other Nobel Laureates and world leaders. We are demanding the setting up of an international social protection mechanism. During the pandemic, we calculated that $53 billion annually could ensure social protection for all children in all low-income countries, as well as pregnant women too,” Satyarthi emphasises.

He points to an urgent need to introduce and or rapidly expand social security and other social protection measures suitable for the informal economy, such as cash transfers, school feeding, subsidies for direct education costs, and health care coverage.

The need for a school-to-work transition and to “target children from poor households, increase access to education while reducing the need to combine school with work among children below the minimum working age” should be highlighted.

In the absence of these social protection safety nets, the  International Labour Organization says it is estimated that an additional 9 million children are at risk of child labour by the end of this year and a possible further increase of 46 million child labourers.

In this context, the fifth global conference presents an opportunity to assess progress made towards achieving the goals of SDG Target 8.7, discuss good practices implemented by different actors around the world and identify gaps and urgent measures needed to accelerate the elimination of both child labour and forced labour.

The conference will also see the active participation of young survivor-advocates from India and Africa. They will share their first-person accounts and lived experiences in sync with the core theme of the discussion.

The conference will also take place within the context of the COVID-19 pandemic, amid fears and concerns that ending child labour became less significant on the international agenda as the world coped with the impact of the pandemic. This could reverse the many gains accrued in the fight against child labour, forced labour and child trafficking.

This is the first of a series of stories which IPS will be publishing during the 5th Global Conference on the Elimination of Child Labour from May 15 to 20, 2022.