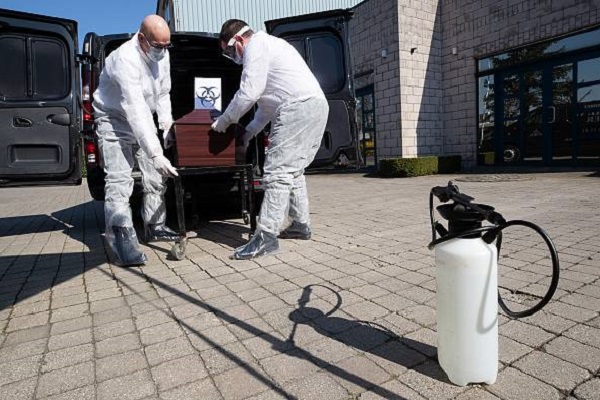 Local authorities are under increasing pressure as the UK death toll is rising, and councils across the country are considering to open mass graves.

Academics from the University of Huddersfield have warned in a new paper, that if just 1% of the UKs population die from coronavirus then it is highly likely councils will not be able to cope.

Death and bereavement services throughout the UK are likely to be overwhelmed in a major increase in deaths, and could struggling with issuing death certificates.

The experts warn their will be a major bottleneck in funeral services with mortuaries operating beyond maximum capacity.

The paper’s authors, Doctor Julia Meaton, Doctor Anna Williams and researcher Helen-Marie Kruger, from the university admit this would be “highly controversial and would upset and anger many communities.”

Adding, “The personal tragedy and loss will be unquantifiable.”

Birmingham City Council announced on Friday they are building a morgue at Birmingham airport, which can hold up to 12,000 bodies.

The city council have around 3,000 cremations per year and 500 burials, and has capacity for 120 bodies each week.

Senior Birmingham Coroner Louise Hunt said, “We understand that it is a very difficult time for everyone and we will do all that we can to make sure bereaved families understand what is happening to their loved ones and to release them for funeral as soon as we can.”

However, during the coronavirus outbreak the local authority could be over capacity week on week, based on the new report of 1% death rate.

The experts wrote, “The impact of such an increase from normal levels will mean that the authorities will struggle to maintain death registrations and disposals that will potentially have serious consequences.

“Practically, not being able to register a death or obtain a death certificate will mean that disposal cannot take place.

“There will be a bottleneck of burials and cremations, causing ceremonies to be delayed with mortuaries filled beyond capacity.

“Families will be prevented from closing bank accounts, pensions, selling property or receiving insurance, which could have financial implications.”

The Guardian newspaper reported that under the government’s emergency guidelines, London’s Hyde Park could be turned into a mass grave should the death toll exasperate morgues across the capital.

Nickie Aiken, Conservative MP for London and Westminster, confirmed that London’s Hyde Park will be turned into a morgue should the outbreak continue to escalate.