COVID-19 an Opportunity to Build Resilience around Food Systems - iCrowdMarketing

COVID-19 an Opportunity to Build Resilience around Food Systems 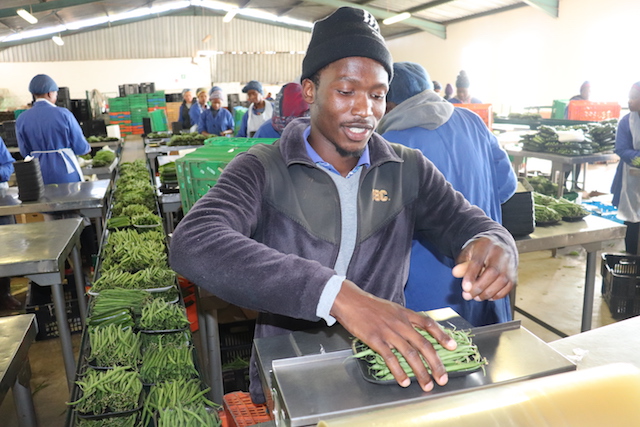 Inside Sidemane Packhouse at Hawane, Eswatini. The Barilla Foundation says the food system needs to be fixed. Credit: Mantoe Phakathi/IPS

MBABANE, Dec 1 2020 (IPS) – The Barilla Centre for Food and Nutrition (BCFN) has appealed to the United Nations to educate citizens to use their roles as consumers to create a momentum for change. This was ahead of the 2021 Food Systems Summit which the United Nations Secretary-General, António Guterres, will host on November 25 next year.

Delivering the message through Danielle Nierenberg, the president of the Food Tank, at the conclusion of the one-day Resetting the Food System from Farm to Fork summit, BCFN said the world should take advantage of the COVID-19 opportunity and not return to normal.

“The normal left us vulnerable, and the crisis we’re experiencing has really widened the cracks in the food system that was in need of much repair,” said Nierenberg who was also co-moderating the session.

BCFN believes that the world can change, develop long-lasting solutions and that restarting the food system is possible. It further urged the UN to help ensure that the globe aligns around a shared purpose that promotes locally and culturally appropriate visions to produce solutions for food and agricultural systems.

“We need to invite all stakeholders on an exciting journey for systemic change. Everyone needs to be a part of this,” she said.

From the summit, BCFN and Food Tank came up with the following five actionable recommendations delivered by co-moderator, Gerry Salole, the chief executive at the European Foundation Centre:

Dr Agnes Kalibata, the Special Envoy for the 2021 Food Systems Summit, accepted the recommendations adding that her takeaway from the day’s deliberations was that farmers need to be asked what they need and not be forced to take anything imposed on them. She was also touched by the chairman of the Barilla Group and BCFN, Guido Barilla’s remarks, who said the world needs a fundamental shift and that all stakeholders must participate in the type of action that is to be taken going forward.

“I also want to bring forward what I heard from indigenous people, raising tough issues around priorities around land and land access and, as Danielle said, ‘normal left us vulnerable’ and it’s not the place to go back to,” said Kalibata. She is also the president of the Alliance for a Green Revolution in Africa (AGRA).

She said the Food Systems Summit provides an opportunity of a decade to look at what the world was not doing right from a Sustainable Development Goals (SDGs) perspective and shift things around.

The summit promises to accelerate global public mobilisation and actionable commitment to make food systems inclusive, climate adapters and resilient. It aims to maximise efforts to meet the challenges of climate change.

Ruth Richardson, the executive director of the Global Alliance for the Future of Food and chair of the Champions Network for the 2021 Food Systems Summit, said it is possible to achieve zero hunger, preserve biodiversity, mitigate climate change and all the other SDGs.

“As a global community, let’s come together, let’s talk about visions as uncomfortable as it sometimes is and unrealistic as some people think it is and figure out where we’re headed because I do think that we can achieve these multiple objectives,” she said.

Speaking at the same event, were leaders of the UN agencies such as David Beasley, the executive director of the UN World Food Programme (WFP). He said the organisation promotes and support local markets.

“So far this year, we spent about USD 668 million on local and regional procurement, buying 1.2 million metric tonnes of food commodities,” said Beasley.

He said the COVID-19 pandemic was a stark reminder of how the global food systems were failing millions of the most vulnerable families across the world.

“As we prepare for the Food Systems Summit, we must ensure that we plant the seed for the most resilient and most sustainable food systems,” he said.

Gilbert Houngbo, the president of the International Fund for Agricultural Development (IFAD), argued that investing in social projection and social inclusion is good for business.

“Every citizen should have access to at least one or two balanced meals a day,” said Houngbo. He added that living in a rural area should not be the last resort and urged the world to ensure that there is no more exclusion. He called for increased efforts for zero hunger and to leave no one behind.

The chief economist at the Food and Agriculture Organization of the United Nations (FAO), Máximo Torero, emphasised the urgent need to build resilience around food systems by using accelerators such as big data, technology and innovation. While he said these three were necessary, he warned that if governance, human capital and institutions are overlooked, the world will face a situation of exclusion and increasing inequalities.

“We need to bring in the complements to make these technologies and innovations to be inclusive,” he said.

To minimise risk in the future, Torero said there is need to increase investments in early warning systems, adopt the One Health Approach which has a potential to prevent the emergence of zoonotic reservoirs such as the current COVID-19 pandemic. He also called for the increase in access to agricultural insurance.