Down in Hell - iCrowdMarketing 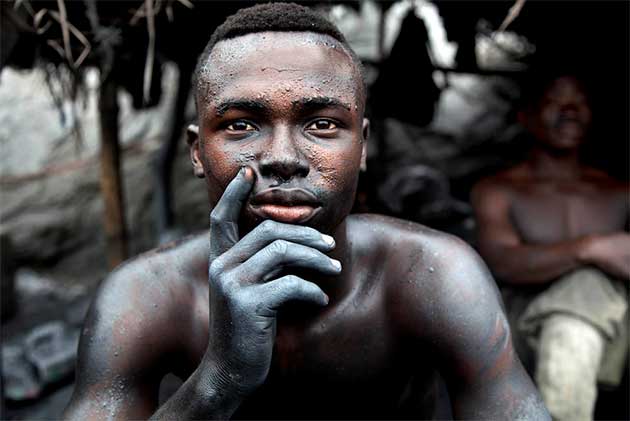 Minor resting after exiting the mine, Ghana. Credit: Lisa Kristine

SAN FRANCISCO, Mar 9 2021 (IPS) – I am about 200 feet down a rickety old mine shaft, in the Ashanti gold mining region of Ghana. It is stiflingly hot and darker than a moonless night. I can only feel the touch of sweaty bodies passing in the darkness and hear the reverberating sound of miners coughing and breaking rocks. The lack of oxygen and dust make it hard to breathe. I have no idea how deep this shaft goes – hundreds of feet? More? If there is a Hell this must be what it feels like.

The abolitionists who have brought me to this illegal operation refuse to go down the dilapidated shaft – an abandoned mine that has been taken over by small-scale outlaw operators after the legitimate owners have moved on. Instead, some of the miners in this “gang” of eight men agree to let me accompany them underground. Each miner carries three things with him – a battered old flashlight tethered to his head with a tatty elastic band, a couple of primitive tools and an empty sack that he hopes to fill with rock containing gold. They spend two to three straight days below ground, hacking at the stone walls to free rocks that they haul to the surface in sacks slung over their shoulders. When they emerge, these men are soaking wet, with bloodshot eyes and a look of exhaustion beyond description.

Slippery tree limbs are all that brace the walls of the narrow mine shaft. At one point I almost lose my grip, my legs swinging wildly in the air with no footing. I instantly think of Manuru, the man I met the other day who had lost his grip and fallen down the shaft. His leg was so severely injured the doctor insisted it should be amputated. But he continues to work; he has no choice. He has no money and is in debt to the trafficker who “hired” him for this illegal operation. Group of miners sitting under shelter blocking the sun after working 48 hours in the mine, Ghana. Credit: Lisa Kristine

Gold mining is big business in Ghana, which in 2019 took over from South Africa to become the leading gold producer in Africa. While the major multinational mining names – Newmont Goldcorp, Kinross Gold, AngloGold – are active in the country’s biggest mines, informal small-scale operations also proliferate.

These small-scale mines operate in the shadows; lacking the proper certifications to operate legally, they turn a blind eye to regulations and worker safety or sanitation. Ghanaian law states that workers should be at least 18 years old, but boys as young as 12 commonly work the mines. In a 2020 study on small-scale gold mining, the International Labor Organization (ILO) notes that the small-scale sector is primarily poverty-driven, and despite being one of the most hazardous forms of child labor, remains an attractive option for children in poverty.

When I met Manuru, he had been working in the mines for 14 years. His uncle brought him here after Manuru’s father had died, hoping to earn money to support himself and his family, Manuru was instead trafficked into bonded labor. Ghanaians from around the country scrounge money to make their way to this region, hoping to find riches in the gold mines. They arrive with no money, to discover they lack the certifications to work in the legal mines. Instead, they are forced to take loans from “recruiters” who then traffic them into slave “gangs” of eight or ten to work as bonded labor in the illegal mines. They are often harassed by the police and private security forces for trespassing in the abandoned mines. They are not paid for their work, instead forced to sell their gold back to the recruiter in a never-ending cycle of labor-debt bondage. When his uncle died, Manuru inherited his debt as well. This is what modern-day slavery looks like. Miner climbing down the mine shaft to work, Ghana. Credit: Lisa Kristine

Mining in the best of circumstances is a high-risk occupation. The lack of proper monitoring and regulation mechanisms for these small-scale operations have translated directly to indecent working conditions. In this ‘wild west’ of shadowy operators, workers lack any protective equipment or knowledge of safety procedures and are exposed to harmful dusts and chemicals like mercury. The abandoned mines that these illegal operators take over have not been maintained, and accidents and structural collapses are common. The ILO estimates that injuries are six to seven times more common in the small-scale operations than the big companies. Group of minors climbing out of the shaft, sweaty from the hot belly of the shaft beneath the ground. Credit: Lisa Kristine

According to the ILO there are more than 40 million people trapped in slavery and forced labor worldwide in everything from mining to brickmaking to prostitution. That is more than the population of Canada. Given the difficulty documenting these illegal practices, this figure is considered conservative. In Ghana the estimate that figure is in the hundreds of thousands. A 2012 research project from abolitionist organization Free the Slaves found that boys as young as 12 are working at these illegal mines. Girls as young as ten are being trafficked as prostitutes for miners. Their research found widespread ignorance of legal protections for children under international and Ghanaian law, and community leaders expressed frustration in the limited government and legal intervention.

Modern slavery thrives in the dark. It is only when we shine a light on these injustices and illuminate the dignity and shared humanity of those trapped, can we begin to work towards solutions.

The author is an International humanitarian photographer, activist, and keynote speaker. She has published six books and has been the subject of four documentaries. She is a founding member of the Global Sustainability Network ( GSN ), pursuing the United Nations Sustainable Development Goal number 8 with a special emphasis on Goal 8.7.