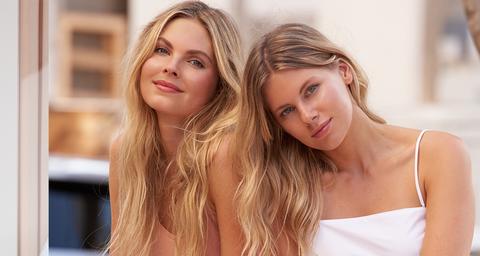 Chrissy Hubbard and Jayla Harnwell were both models living in NYC. Their lives were busy, on-the-go, and hectic. Constantly traveling, along with plenty of late nights and early mornings, started to take a toll on their skin. They both suffered from acne, eczema, dehydrated skin, and brittle hair and nails. All this, combined with the lack of clean, healthy snacks while they were on set, made them realize they needed to create something to take care of all these problems. They decided enough was enough, and in February 2016 they started to work on a beauty-boosting formula in their tiny kitchen.

After eight months of recipe testing, ingredient sourcing, packaging sourcing, design, and a lot of trial and error, they launched Kalumi BEAUTYfood in January 2017. It wasn’t easy. Chrissy was living in Los Angeles, while Jayla stayed in NYC. They collaborated from coast to coast, working from their homes for one year. This was a major struggle, but one they were determined to work through.

In April 2018, Jayla decided to move to Los Angeles to join Chrissy so they could put roots down in a physical office and start to expand their business. The first two years, they felt as though they didn’t have a great balance in life. They put all of their time and energy into this business, because they believed there was a need for a snack that was convenient, nourishing, and could do more for your body than just keep it full. What they created was an ingestible beauty supplement packed with marine collagen, protein, and superfoods like yacon syrup and sweet potatoes.

From creams to pills to injectables, there are countless products out there promising to enhance your beauty and solve your problems. Chrissy and Jayla realized there was a void in the beauty market for something that could not only make your life easier, but actually worked. That’s where Kalumi came in. Their bars keep you full, give you energy, and can help with all your skin woes. Plus, they’re non-gmo, gluten, dairy, and soy-free, so you know you’re fueling your body with clean ingredients.

So whether you’re someone struggling to improve their skin, or someone who just wants to get their glow on, Kalumi was created for you, because Chrissy and Jayla believe beauty shouldn’t be unattainable.