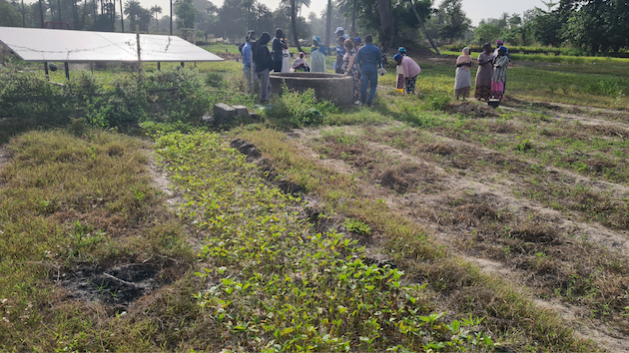 BULAWAYO, Jun 10 2022 (IPS) – Onions and rice are a conspicuous part of every meal in Senegal, including the famous Poulet Yassa. However, climate change makes it hard for smallholder farmers to grow enough staple food with extra to sell for income.

Senegal is vulnerable to the impacts of climate change from droughts, flooding, sea-level rise, coastal erosion, and bush fires, according to the Climate Change Knowledge portal of the World Bank.

“For some time, we have been facing climatic risks such as the scarcity of rains that persist more and more, high heat and a decline in productivity leading to food insecurity,” says Coumba Diallo, a smallholder farmer from Gourel Baydi village in the Tambacounda region.

Diallo, 47, is the President of the Kawral Women’s Group of Gourel Baydi, whose members have been trained to farm sustainably to beat climate change while increasing productivity and profits.

A regional project is helping farmers adapt to the impacts of climate change which has made agricultural production a gamble. Under the Adaptation and Valorization of Entrepreneurship in Irrigated Agriculture (AVENIR) project led by Mennonite Economic Development Associates (MEDA), in partnership with the Alliance of Bioversity International and the International Center for Tropical Agriculture (CIAT), smallholder farmers in Senegal are being trained in farming as a business in agroforestry, horticulture and rice.

The AVENIR project aims to improve the social and economic well-being and resilience of farming households in Senegal’s Sedhiou and Tambacounda regions. The two areas in the southwest and east of the country are vulnerable to climate change, experiencing drought spells, flooding, coastal erosion and soil salinity.

Commending the project, Diallo commented that demonstration activities had armed her with the tools to deal with climate change, such as using adapted seeds and learning new agricultural practices to increase her crop yields and income while being more resilient to the climate.

“Learning through practice has helped us to have a better knowledge of adapted varieties, a good mastery of fertility management practices, agroforestry and the drip system to make efficient production with good yields,” Diallo explained.

Another farmer, Clément Sambou, co-founder, and coordinator of Startup-sociale in the Sedhiou Region, says the water salinity, silting, loss of arable land and water erosion are major risks in his region. They are tackling these through the adoption of better agricultural practices.

The AVENIR project encourages women and young people to treat farming as a business by promoting climate-adapted irrigation and agricultural practices. It increases the profitability of agribusinesses in the production of baobab, mango, cashew, onion, okra, ditakh, madd, pepper and rice.

The project will benefit more than 10 000 women and youth from farming households and indirectly impact another estimated 35 000 individuals.

“We want to ensure that farmers have increased their ability to cope with the climate risks they face in the regions where they are producing food,” says Caroline Mwongera, a senior scientist at the Alliance of Bioversity International and CIAT, based in Nairobi, Kenya.

“There is a very big difference between our practices and those current conveyed through the demonstration sites,” said Diagne (29), vice-president of a group of young modern farmers in Tambacounda.

“With these new technologies, there is a reduction in workload for irrigation with better control of water and working time,” Diagne noted.

The project has focused on adaptation and agribusiness after realizing that horticulture was an easy market entry option for women because of the high demand for horticulture products.

“We wanted to create opportunities for women and young people to engage and sell their produce in the local markets,” says Mwongera. “The varieties we selected for horticulture are locally demanded. For example, onion is a big part of the Senegalese diet,  tomatoes, pepper, and okra. In addition, horticulture is a good fit for women and youth with limited access to irrigated land,  which can measure as small as twenty square metres. ”

The project has promoted salinity and drought-tolerant rice varieties. The Senegalese research organization, ISRA and the Africa Rice Centre developed the rice. For agroforestry, quick maturing mango, cashew and baobab varieties have been introduced.

“If you have food and income, you can cope with climate risks. We want the food system to be diversified. That is why we are focusing on the three commodity groups: rice, agroforestry, and horticulture because that helps you to withstand risks better, says Mwongera. She adds that farmers are also trained to intensify their production to grow short-season crop varieties under irrigation.

Farmers have been introduced to affordable and labour efficient water technologies to save on scarce water resources.

“We are now training farmers to use drip irrigation, which is water efficient and has low labour demand, especially for women,” Mwongera told IPS, explaining that farmers have shifted from manual flood irrigation, sprinklers and watering cans which used a lot of water. 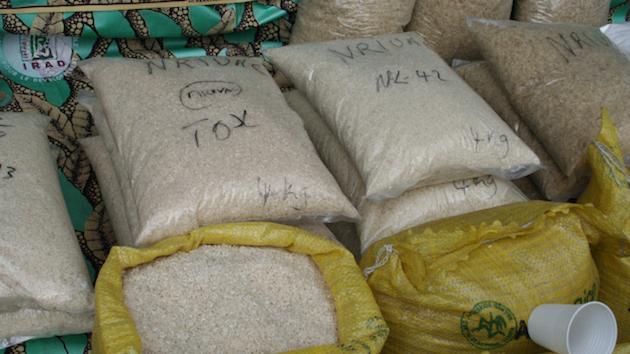 Rice and onions are part of every meal in Senegal, but smallholders often face food insecurity. Now a project helps farms adapt to the impact of climate change, Credit: Busani Bafana/IPS

To encourage farmers to use water-efficient technologies, the project has introduced an incentive-based purchase programme (e-voucher) to provide discounts for farmers. Farmers get technologies at a fraction of the value with an option to pay the balance when they produce and sell their crops.

Mwongera noted that farmers had poor access to viable markets, which meant they could not increase their production if they had nowhere to sell their produce. There is a need for a market value chain that includes producers, processors, transport providers and the financial sector.

“We also provide weather information using SMS and integrated voice through a service provider who gets weather forecasts from the National Agency for Civil Aviation and Meteorology of Senegal (ANACIM). Farmers use this information to plan when to plant and what varieties to plant,” said Mwongera.

Climate change threatens Senegal’s social and economic development, which is vulnerable to droughts, floods, and high temperatures, which impact the agricultural sector. Agriculture employs 70 percent of the country’s workforce and contributes about 17 percent of the Gross Domestic Product.

Top climate scientists have warned of the urgency of reducing carbon emissions as human-induced climate change affects all development sectors, including agriculture. The latest report from the Intergovernmental Panel on Climate Change (IPCC) says the increased frequency and intensity of extreme weather has reduced food and water security, hindering efforts to meet Sustainable Development Goals.

“Increasing weather and climate extreme events have exposed millions of people to acute food insecurity and reduced water security, with the largest impacts observed in many locations and/or communities in Africa, Asia, Central and South America, Small Islands and the Arctic Jointly,” scientists said. They noted that sudden food production losses and access to food compounded by decreased diet diversity had increased malnutrition in many communities, especially small-scale food producers and low-income households.