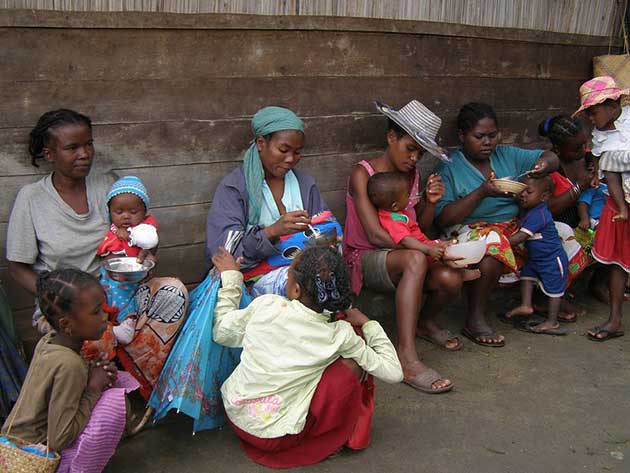 Mothers and their children gather at a community nutrition centre in the little village of Rantolava, Madagascar, to learn more about a healthy diet. Credit: Alain Rakotondravony/IPS

NAPLES, Italy, Nov 25 2020 (IPS) – The risks factors contributing to the dramatic rise in non-communicable diseases (NCDs) in recent decades have been known for a long time but the Covid-19 pandemic has brutally exposed our collective failure to deal with them.

Reporting on the findings of the latest Global Burden of Disease Study, The Lancet warns of a “perfect storm” created by the interaction of the highly infectious Covid-19 virus with the continued rise in chronic illness and associated risk factors, such as obesity and high blood sugar.

The mounting dangers posed by NCDs are highlighted in Good Health and Well-Being, the third of the 17 interlinked Sustainable Development Goals, which targets the reduction of premature mortality from NCDs through prevention and treatment by one third by 2030.

Cardiovascular diseases account for most deaths from NCDs, followed by cancers. Diabetes is also a major killer. Deaths from Alzheimer’s disease and dementia are also seen to be rising dramatically – partly because people in richer countries are living longer but also because of improved diagnosis and reporting on death certificates, as seen in the UK where it is now the leading cause of death for women, according to the Office for National Statistics. Many — but not all — of the risk factors leading to these NCDs are preventable and treatable through changes in unhealthy behaviours. Tackling them will bring us enormous social and economic benefits.

Good nutrition is the common key in reducing the risk of NCDs, even Alzheimer’s for which there is no cure. Recent studies cited by the World Health Organisation indicate that people can lower the risk of dementia by eating a healthy diet, as well as by taking regular exercise, not smoking and avoiding harmful use of alcohol.

Obesity has become a global epidemic, not just in wealthier countries. It is on the rise in low and middle income countries, coexisting with undernutrition and stunting. One in nine people worldwide are hungry or undernourished. One in three people are overweight or obese, according to the Global Nutrition Report 2020.

Over 650 million people across the world were classified obese in 2016, exposing themselves to a major risk factor for cardiovascular disease, hypertension, stroke, diabetes and at least 12 types of cancer.

But as noted by Agnes Kalibata, Special Envoy for the UN 2021 Food Systems Summit, addressing the challenges of nutrition are more complicated than those of hunger or food security because they go beyond food to cover issues of quality, access and affordability.

And so it is with obesity, a highly complex aspect of malnutrition. Policies and best practices range from the development of eating guidelines and new educational programmes to the imposition of taxes that discourage unhealthy consumption patterns.

Studies have shown that taxes increase prices, decrease purchases and reduce consumption of unhealthy food and drink. Tax policies can also influence positive change by leading to the reformulation of products to remove some of the sugar, salt, fat or calories. Norway has had a tax on added sugar since 1922.

Research into NCDs must touch many bases. The Food Sustainability Index, developed by the Barilla Center for Food & Nutrition (BCFN) in partnership with the Economist Intelligence Unit, ranks 67 countries across three categories. The US comes 34th out of 35 high-income countries in the nutritional challenges pillar, characterized by diets high in sugar, meat, saturated fat and sodium. Japan tops the nutritional ranking, while Greece and India perform best in their income categories for the quality of their policy responses to dietary patterns.

In the European Union, around 550,000 people of working age die prematurely from NCDs. As the leading cause of mortality, they are estimated to cost EU economies 115 billion euros a year, or 0.8% of GDP. More than 20% of people are obese, while about 10% of those aged 25 years and over have diabetes.

Inequities in food systems, from production to consumption, must be confronted to deal with the surge in diet-related NCDs. The vast majority of people cannot access or afford a healthy diet. Sales of cheap but highly processed foods are soaring in rich countries but also growing fast in the developing world.

The importance of nutrition and the role of food as prevention will be key themes of Resetting the Food System from Farm to Fork, a conference hosted by BCFN in partnership with Food Tank on December 1 to formulate recommendations for the 2021 Food Systems Summit.

Just as there is no single silver bullet to prevent or treat obesity, so we have to deal with an array of social inequalities — including poverty, race and housing — that interact with NCDs to increase the risk of serious illness and death from Covid-19.

NCDs have been critical in driving the death toll from the virus, which has killed more than 1.2 million people so far. And in a vicious circle, Covid-19-related lockdowns are exacerbating poverty, forcing more people to resort to food banks and aid deliveries to feed their families. The need to address nutritional challenges through food systems has never been so critical.

Gabriele Riccardi is Professor of Endocrinology and Metabolic Diseases, University of Naples “Federico II”; former President, Italian Society of Diabetology – SID; member, Board of the Barilla Center for Food and Nutrition Advisory, Italy