“It’s very necessary because the leaders, the decision-makers, sometimes forget, sometimes neglect what they promised. They need to be reminded. And also, because the conference has given voice to children’s voices.” – Former child labourer, Amar Lai, on why the 5th Global Conference on the Elimination of Child Labour is important. 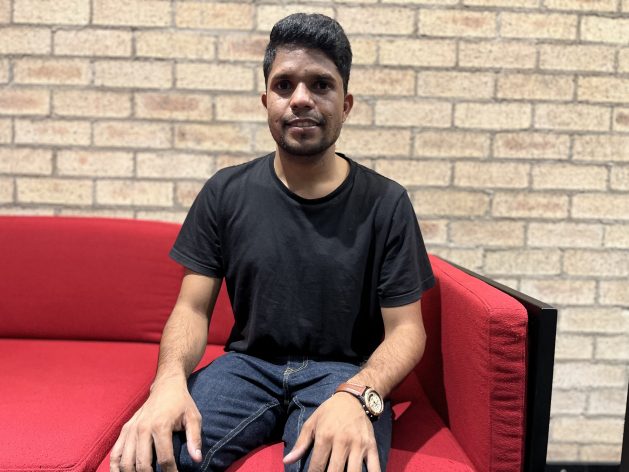 Amar Lai, a former child labourer, is now a human rights lawyer and a trustee of the 100 Million Campaign. He was saved from child labour by Nobel laureate Kailash Satyarthi who identified him while running an education campaign in the area where he worked alongside his parents in a quarry. Credit: Lucky Agbovar/IPS

Durban, May 19 2022 (IPS) – Amar Lai’s first memories are working alongside his parents and siblings in a quarry, breaking rocks. He was aged four.

Now chatting to Lai, a confident 25-year-old human rights lawyer, it is hard to believe he was once a child labourer.

But when you hear his story, it is easy to understand why this man saved by the Kailash Satyarthi Children’s Foundation, which rescues bonded children, has dedicated his life to the same cause.

Lai was interviewed on the sidelines of the 5th Global Conference on the Elimination of Child Labour in Durban until May 20, 2022. The conference has seen five days of intense discussion on how to end child labour, including exposés of hazardous working conditions the children find themselves in.

At the tender age of four, Lai was forced to work in a quarry in Rajasthan, India.  His family were destitute, so they had to work for a pittance to put food on the table. They lived in a hut.

“We used to work from morning to night, and sometimes the whole night. My family was not allowed to miss a single day of work because it meant they would not be paid, which meant no lunch or dinner.

His father, Lai recalls, was paid a “small amount of money, and that’s how we survived”.

It was back-breaking work, especially for the little ones – and dangerous.

“You had to hold a machine to break the mine, and sometimes the stones would fall down. My brother and sister were often injured because when breaking the stone, you needed to use your hands, you got cut, anything could happen.”

Going to the doctor was out of the question, so they had to make do with home remedies.

Lai said they lived very far from the city, and they knew nothing about schools nor life beyond their little isolated world.

Then something happened that changed Lai’s life: “In 2001, Nobel laureate Kailash Satyarthi was running an education march, and moving through (the area) where we were, and they identified that my family and I were working there.”

Satyarthi convinced Lai’s parents that their children shouldn’t be working but in school – and although this was greeted initially with scepticism, he and two of his brothers eventually moved to Satyarthi’s rehabilitation centre for children rescued from child labour. The centre provides education and technical skills to the kids.

“I passed my senior high school, and then I started to think about what I should do in the future. I met many children there who were just like me or worse off. I realised that I was so lucky to get an opportunity to study, unlike millions of other child labourers.”

So, Lai decided to become a lawyer to help children like himself.

“I could fight for them in court, stand in the court to change the system, policies and regulations. I could challenge the government.”

“Today, I am fighting for children who are sexually abused or are in child labour, trafficked and exploited. I am leading their cases every single day in court.”

He works for the Kailash Foundation, which provides free legal services to vulnerable children.

Lai is also a trustee of the 100 Million Campaign.

“This is a campaign started by Kailash. The idea is that we 100 million youth leaders who are educated, who understand and are privileged to have an education, need to stand up for those who are still in child labour and being exploited.”

On the foundation’s impact on his life, Lai says: “I cannot believe what the foundation did for me. I just picture myself in a house that was dark, and I couldn’t see anything and then in 2001, I came out of the house, and there were a lot of lights.

“And because of the lights, I can give some light to another child’s life. I feel I am the voice of those millions of children that are not at the 5th Global Conference on the Elimination of Child Labour.”

Lai says he lives by Satyarthi’s rule: “You don’t need to do a lot, just do your bit”.

“If every single person can do their bit, then one day there will be no child labour in the world, and every child will get an education.”

Lai, a delegate at the conference in Durban, South Africa, which is trying to find ways to reach the UN’s goal of ending child labour by 2025, believes it’s an important platform.

“It’s very necessary because the leaders, the decision-makers, sometimes forget, sometimes neglect what they promised. They need to be reminded. And also, because the conference has given voice to children’s voices.”

He is convinced that their plea will be heard.

“I think the voice, the power we have, what we have faced we can represent, and I believe that it will make an impact because what happened to us is happening to 164 million children around the world.”

Technology for Tracing the Work of Child Labour Could Help End the Practice
Political Will and Partnerships Key to Ending Child Labour, says ILO’s Joni Musabayana
Call to Invest ‘Serious Resources’ in Education, to Stem Tide of Child Labour