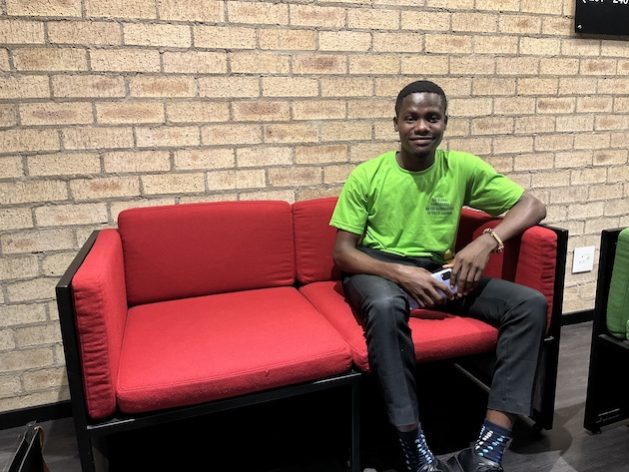 Lucky Agbavor survived child labour in Ghana and put himself through school by selling ice cream. The Pentecostal Church pays for his tuition during his nursing studies, but he still sells juice to put food on the table. Credit: Cecilia Russell/IPS

Durban, May 24 2022 (IPS) – Lucky Agbavor sleeps on a mattress in a church in Accra, Ghana sells juice to earn an income, and has been a child labourer since he was four. Now he has made an impact on the international stage when he participated in the 5th Global Conference on the Elimination of Child labour.

Agbavor’s life’s trajectory lays bare the horrors of child labour and how poverty and lack of education rob people of their childhood and the prospect of a decent future.

The link between the lack of education primarily driven by poverty as a root cause of child labour underpinned virtually every discussion at the Conference which was held in Durban, South Africa in May 2022.

Now a second-year nursing student at the Pentecost University, Agbavor never enjoyed a childhood. At four, his mother sent him off to her uncle in a remote village because she could not provide for her son. He had to help his ‘grandpa’ in his fishing enterprise.

His mother took him back home four months later, fearful for Agbavor’s life after he fell off her uncle’s canoe and almost drowned.

Two years later, he was sent to another relative, a cash crop farmer. So here was this six-year-old who had to wake up at 3 am every day to start work: “I had to collect the fresh ‘wine’ drained from the palm trees to be sent to be distilled for alcoholic extraction. I was doing this alongside household chores every morning.”

By the time Agbavor got to school, he was already exhausted. “Sometimes I was very stressed and dozed off, and often I didn’t grasp anything taught in class”.

After school, he tried to make money to pay for his fees by fetching cocoa from the farm and packing it for processing.

“Sometimes, we went to the forest to cut and load wood. We used chain saws and then carried the beams to a vehicle for transportation.”

The chopping of the trees was illegal.

“Forest guards would intercept us because it was illegal. So, they would arrest the operator, and you would not get paid even the paltry money we worked so hard for,” he says.

Agbavor often went to school in torn uniform and used one book for all his subjects.

This continued for ten years, but at least he managed to get a rudimentary education.

“Glory to God I passed my basic education in 2012 where I could continue high school, but unfortunately my ‘grandfather’ said he had no money even though I had worked for him for the past ten years,” he says.

Agbavor returned to live with his mother, whose financial situation was still dire, and he had to fend for himself.

“I started selling ice cream, coconuts, bread. I even ventured into photography with my uncle, who had a studio where he promised to give me a job and take me to high school, but after working for him for a year, he failed to keep his promise.”

Agbavor says he then went into full time ‘business’ selling ice cream on the streets to raise funds for high school. He worked long hours and had to sell lots of ice cream to earn enough money. 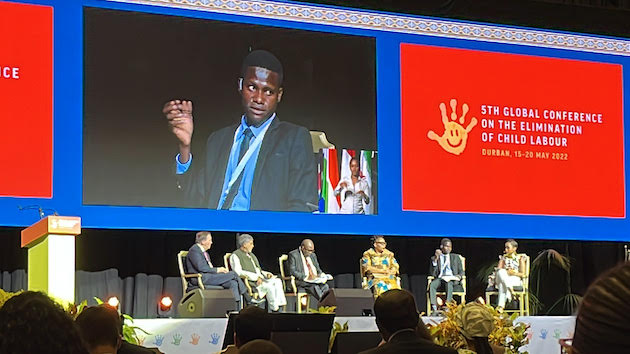 Unfortunately, Agbavor, who wanted to be a doctor, did not achieve the results needed to go to medical school, so he decided to do a nursing degree as a way to eventually study medicine.

The Pentecostal Church agreed to pay his fees, but he still had to find the money for food and other necessities. He now sells juice to earn an income and says he is grateful to some local benefactors who help him from time to time. But life is still far from rosy. He has no home and sleeps on a mattress in the church.

Agbavor’s presence at the conference is thanks to the National Union of Ghana Students, who felt Agbavor’s story would be an eye-opener. He was one of several child labour survivors including several saved by the Kailash Satyarthi Foundation who shared their stories..

It’s Agbavor’s first trip outside his country. Yet, his self-confidence and charisma have allowed him to hold his own at a conference attended by politicians, business people, trade unionists, and NGOs worldwide.

He attributes his ability to stand his ground to his tough upbringing.

“I have seen the worst of life. It made me strong. I am like a seed. I sprouted out of the soil. It is the same potential millions of other children (in bondage) have.”

Agbavor’s message to the conference is that while access to free education is key to liberating children in bondage, the quality of that education is equally important.

“I want to tell people that the schools that educate the children of ministers, politicians, doctors, those same schools can absorb and educate child labourers,” he says.

This is one of a series of stories that IPS published around the 5th Global Conference on the Elimination of Child Labour in Durban, South Africa.

outh Survivors, Activists Will Hold Governments Accountable to Call to Action on Ending Child Labour
Former Child Labourer, now Lawyer, Passes Light of Freedom to Others
Technology for Tracing the Work of Child Labour Could Help End the Practice