Health Workers Lauded for Role in Leprosy Treatment During Pandemic 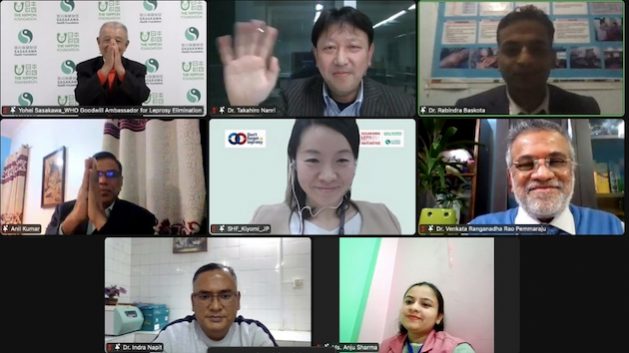 Yohei Sasakawa, WHO Goodwill Ambassador for Leprosy Elimination and Chairperson of the Nippon Foundation, thanks participants at a webinar ‘Raising Awareness about Leprosy, Role of Health Professionals at the Grassroots Level’ organized by the Sasakawa Leprosy Initiative. He is with other participants from Japan, India and Nepal in the “Don’t Forget Leprosy” campaign event.

Nairobi, Kenya, Jan 20 2022 (IPS) – The human rights of people affected by leprosy are central to Yohei Sasakawa’s concept of a leprosy-free world.

Sasakawa, the WHO Goodwill Ambassador for Leprosy Elimination and Chairman of the Nippon Foundation, was speaking at a webinar ‘Raising Awareness about Leprosy, Role of Health Professionals at the Grassroots Level’ organized by the Sasakawa Leprosy Initiative.

A leprosy-free world was one where “patients and those cured of leprosy live free of discrimination and, people around them will be free of the misunderstanding, ignorance and fear that perpetuate discrimination”, he told the webinar.

Sasakawa Leprosy Initiative is a strategic alliance between WHO Goodwill Ambassador for Leprosy Elimination, the Nippon Foundation and Sasakawa Health Foundation for achieving a world without leprosy and problems related to the disease. The initiative spearheaded a campaign, “Don’t Forget Leprosy”, to raise awareness about the condition in the face of the coronavirus pandemic.

The WHO Goodwill Ambassador envisions a post-COVID world where those affected by leprosy will be liberated from such stigma and discrimination in keeping with human rights.

Sasakawa says this world is now at risk of delaying leprosy elimination due to the COVID-19 pandemic, as there was a 37 percent drop in reported new cases and leprosy programs in many countries have stalled or scaled back.

Participants heard about the role of health professionals in combating leprosy, recognition of this role and the successes and challenges faced in addressing leprosy during the ongoing health pandemic.

Their role, Sasakawa said, was a central pillar to the vision of a leprosy free world as it helps reduce transmission and disability.

An estimated three to four million people live with some form of disability caused by leprosy, also known as Hansen’s disease.

“The ‘Don’t Forget Leprosy’ is a global campaign because our voices alone are not enough. Stopping leprosy requires (the involvement of) all of us, from India and Nepal to all other countries around the world,” he said. 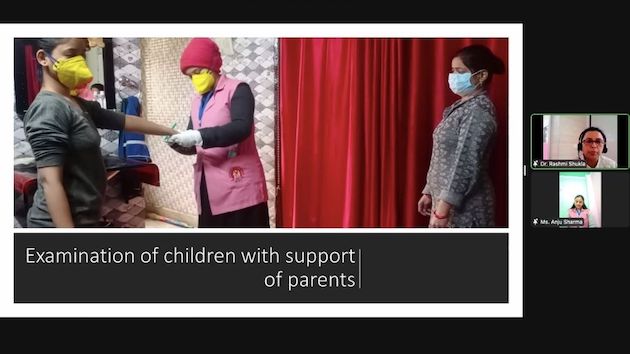 Dr Rashmi Shukla outlined efforts in India to identify and treat patients with leprosy. He was speaking at a webinar ‘Raising Awareness about Leprosy, Role of Health Professionals at the Grassroots Level’ organized by the Sasakawa Leprosy Initiative. Credit: Joyce Chimbi/IPS

Dinesh Basnet, Central President of the International Association for Integration, Dignity and Economic Advancement (IDEA) in Nepal, said he was happy to see progress in recent years.

“More so Nepal’s efforts to track and eliminate leprosy. Even during the pandemic, detection and treatment interventions were uninterrupted, and this has been possible due to government commitment and unrelenting efforts of health professionals,” said Basnet.

“People affected by leprosy were not forgotten as communication continued through WhatsApp groups, and this was critical during the lockdown.”

Dr Indra Napit, a senior Orthopedic Surgeon at Anandaban Hospital, Nepal, spoke about innovative technology in the trial of Autologous Blood products to promote ulcer healing in Leprosy. He added that a new drug was on trial to manage reactions to this form of treatment at this leprosy mission.

In a video message, Birodh Khatiwada, Nepal’s Minister of Health and Population, spoke of Nepal’s undisrupted program to address leprosy, including the continued supply of leprosy medication despite the pandemic.

Sasakawa emphasized that it was indeed the ultimate goal for India and other affected countries worldwide to reach zero leprosy cases by 2030.

Despite challenges in the fight to eliminate leprosy, a ray of hope shines through, with Anju Sharma sharing good practices in case finding in India amid the ongoing health pandemic.

“Screening for leprosy during the pandemic is much more difficult. As COVID-19 cases increase, so does my responsibilities because I have to strictly follow COVID-19 protocols, and this takes a lot of time,” Sharma explained.

“Due to the pandemic, people are hesitant about getting screened. But I reassure them that protocols will be observed and remind them that failure to detect and treat leprosy can lead to disability.”

Dr Venkata Ranganadha Rao Pemmaraju, acting team leader, WHO Global Leprosy Programme, emphasized that discussing the role of health workers was critical, and hearing from those in the frontlines helps efforts to eliminate the pandemic move forward.

WHO, he said, subscribes to the Don’t Forget Leprosy campaign. He lauded ongoing efforts to sustain counselling for those affected by leprosy and those who tracked and managed Nepal-India cross border leprosy cases despite challenges COVID-19 protocols like restrictions on movement and lockdowns. 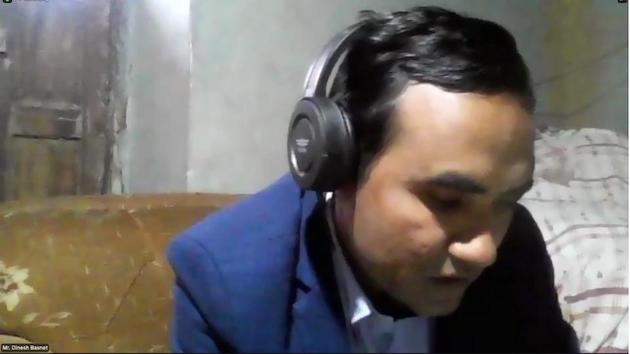 Dinesh Basnet, a person affected by leprosy thanked health care workers and others for their efforts in eliminating the disease. He was talking at a webinar ‘Raising Awareness about Leprosy, Role of Health Professionals at the Grassroots Level’ organized by the Sasakawa Leprosy Initiative. Credit: Joyce Chimbi/IPS

Similarly, Dr Rabindra Baskota, the Leprosy Control and Disability Management Section director in Nepal’s Ministry of Health and Population, confirmed that health workers had been relentless to find new cases, raising awareness on leprosy and treating patients despite ongoing challenges.

“Still, there is a need to train community health workers to detect new cases and manage reactions to leprosy treatment even as older and more experienced health workers retire,” he said.

Dr Anil Kumar, the deputy director-general (Leprosy) in India’s Ministry of Health and Family Welfare, who spoke about good practices in combating leprosy said that a leprosy-free India was not very far off.

Despite a notable decline in screening and detecting cases due to COVID-19, he said critical interventions were nonetheless rolled out, and that leprosy-related services continued at the grassroots level.

“Migrant labourers were screened for leprosy at point of return to home districts and patients on treatment tracked. Treatment defaulters were cross notified based on the address in treatment record,” Kumar said.

Sasakawa suggested that health workers’ training included human rights, and the panel lauded health workers for their passionate and proactive steps to eliminate the disease.