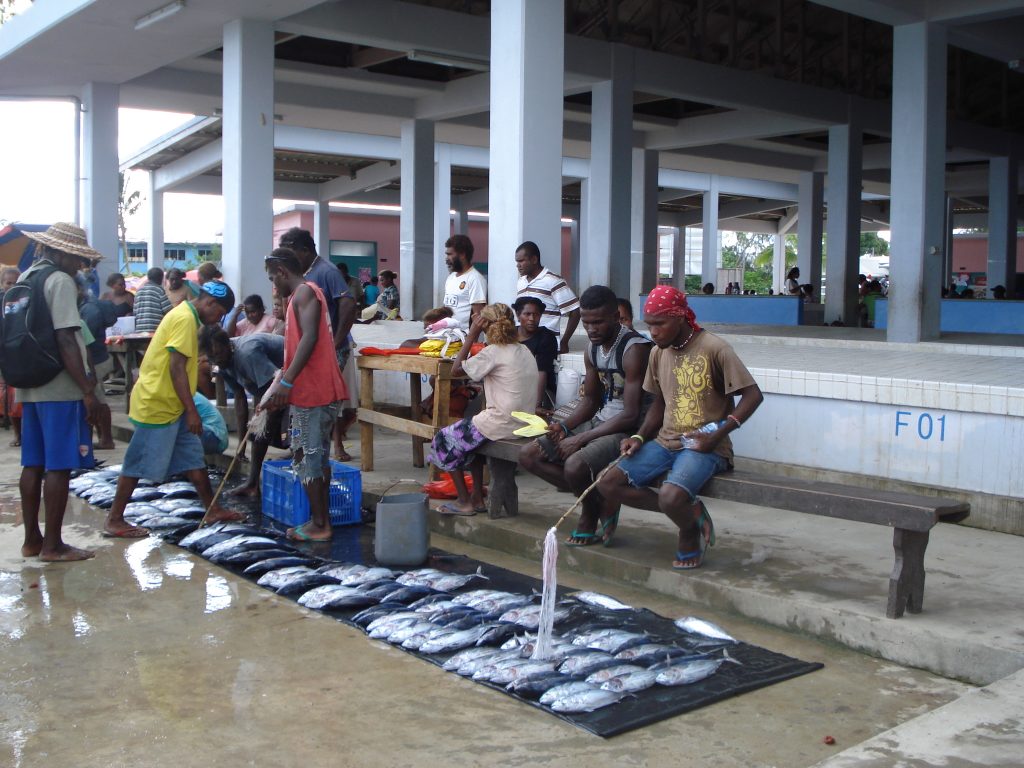 CANBERRA, Australia, Oct 13 2020 (IPS) – Coastal fisheries in the Pacific Islands have become a food and livelihood lifeline to many people who have lost jobs, especially in urban centres and tourism, following COVID-19 lockdowns and border closures. Now governments and development organisations are trying to meet the crisis-driven survival needs of here and now, while also considering the long-term consequences on near shore marine resources and habitats.

“In Vanuatu, we don’t have any cases of COVID-19. But around us the world is in lockdown and the incomes indigenous people usually get from tourism have all gone, they have completely come to a halt,” Leias Cullwick, Executive Director of the Vanuatu National Council of Women in Port Vila, told IPS.  Tourism accounts for an estimated 40 percent of Vanuatu’s Gross Domestic Product (GDP).

“But we still have our own land to plant crops and we can get fish from the sea,” she continued.

Subsistence and small-scale commercial fisheries in coastal areas are a crucial source of nutrition and incomes to communities throughout the Pacific Islands. Fifty percent of coastal households in the region gain a primary or secondary income from fishing, while 89 percent of households generally consume seafood on a weekly basis, according to the regional development organisation, the Pacific Community (SPC).

The COVID-19 induced economic downturn has only increased the importance of traditional livelihoods and sources of food. At a meeting of the Pacific Islands Forum Fisheries Agency in August, the Director General, Dr. Manu Tupou-Roosen emphasised that “it is crucial for fisheries to continue operating at this time, providing much needed income to support the economic recovery, as well as to enhance contribution to the food security of our people”.

However, the increased movement of urban residents back to rural villages and to their extended family networks has, in some areas, had consequences. Dr Andrew Smith, Deputy Director (Coastal Fisheries) at the SPC in Noumea, New Caledonia, told IPS of some of the impacts, .

“What we have been seeing are cases where people who are not familiar with the areas, or not familiar with fishing methods, are either harvesting protected species or under-sized species or the wrong species. There have been reports of fishers going into marine managed areas or into other people’s traditional fishing zones,” he said, adding that: “There is also, in some cases, increased conflicts occurring because people are fishing in the wrong places and catching the wrong fish, both from a national fisheries perspective and the laws, but also from traditional cultural perspectives.”

In surveys conducted in 43 rural villages in the Solomon Islands and Vanuatu prior to July by WorldFish, national fisheries agencies in the Pacific Islands and the Australian National Centre for Ocean Resources and Security, 46 percent and 55 percent of people respectively claimed that there was a shortage of food in communities.

Neither Pacific Island country has recorded any COVID-19 cases to date. However, restrictions on large gatherings and border closures across the region, to prevent any spread of the virus, have diminished shipping and trade. Vanuatu, for example, is under an extended State of Emergency until the 31 December and the government promotes social distancing and enhanced hygiene practices.

“When COVID-19 first emerged, our country went into stopping main markets, they were stopped for a couple of months. It has now been lifted. People can go out fishing, but it is very difficult for people to sell fish because people are on lower incomes,” Cullwick said.

Coastal fishing, in the zone between the shore and outer reefs, includes species, such as finfish, trochus, lobsters and crabs. The vast majority of the coastal catch is for subsistence. In Vanuatu and the Solomon Islands, subsistence fishing makes up 71 percent and 75 percent respectively of the total coastal catch each year. And there is evidence this year that greater hardship has led to increased fishing for food.

This is an additional pressure on coastal resources in the Pacific, which are already being affected by climate change, greater exploitation due to growing populations and the environmental degradation of marine habitats by factors, including pollution, urbanisation and natural disasters.

“The region is a little bit more used to dealing with tropical cyclones, that are always devastating, but are disasters that happen relatively frequently, but they are usually more localised, and the initial impact shorter. Whereas COVID-19 has had an immediate impact, but will have a very long term effect across the region, more of a slow burn disaster, and then you’ve got climate change, which is impacting now, but it is an even slower burn. So you’ve got these multiple stressors on both the resources and the habitats,” Smith told IPS.

According to the development organisation, which is consulting extensively with national governments throughout the region on responding to the present crisis, but a major challenge is achieving a balance between meeting short-term survival needs and managing the long-term repercussions.

One strategy to address immediate food security is encouraging more households to take up aquaculture and establish fish farms.  The Vanuatu Government is supporting this initiative by providing free tilapia fingerlings and feed to families who have taken the first step in building a fish pond.  This is a way of both boosting nutrition and alleviating further over-fishing near to shore. The Pacific Community is also assisting countries to set up near shore fish aggregating devices, which are easily accessible by local fishers.

The cornerstone of this approach is increasing the capacity of coastal communities to manage their fishing practices and take the lead on ensuring the future of their marine resources, supported by governments and development organisations. It’s an important element of the 2015 Noumea Strategy, also known as ‘A New Song for Coastal Fisheries,’ a regional vision of sustainably managing fisheries for the future.