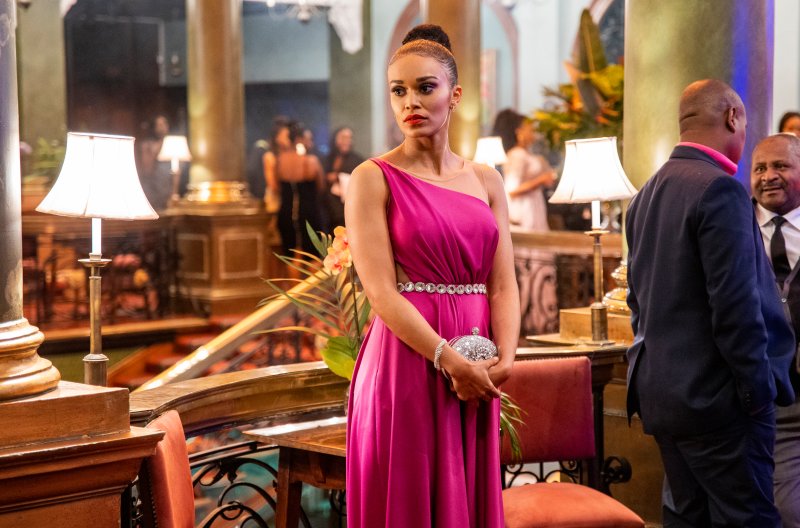 As Queen Sono tries to eavesdrop on the suspicious conversation between two men sitting near her at a stylish Zanzibar rooftop bar, her grandmother calls her, asking in isiZulu when she’s going to come to church. Minutes later, Queen has set aside her personal life and is fully embroiled in her mission, fending off two attackers in a busy indoor marketplace as onlookers watch the action unfold amid the fruit, vegetables and spice packets. When we think of the spy genre, the icons that come to mind first are often the white, male masters of espionage, the James Bonds and Jason Bournes. But the new Netflix series Queen Sono, out Feb. 28, offers its own take on the genre in the platform’s first fully produced African original series.

Assuming various aliases, lead character Queen (Pearl Thusi, best known for her roles in U.S. television series Quantico and the Netflix film Catching Feelings) is a spy searching for the truth behind her mother’s assassination while undertaking a dangerous assignment requiring her to traverse the African continent. In developing the narrative, creator Kagiso Lediga sought to blend the history of South Africa with its present-day politics, all set against the backdrop of a femicide crisis and increasing violence against women. “I thought, how cool would it be to have a woman that embodies something different, the idea that women can fight back,” he tells TIME.

The series was shot in 37 different locations with an all-African cast and crew, following Queen on missions in Kenya’s hub of Nairobi to an elite bar in Zimbabwe’s capital, Harare, as well as her base in Johannesburg. A variety of languages are interspersed with English throughout the six episodes, including Afrikaans, isiXhosa and Swahili. Lediga wanted to counter the way in which perceptions of Africa tend to get flattened by those unfamiliar with its multifaceted reality, and to offer an alternative to perceptions that focus on the hardships faced by people on the continent. “It’s not just about flies on babies suffering from malnutrition,” he says. “There’s a vastness of cultures. It’s the second biggest continent, with some 1.3 billion people, and I’m hoping people will get to appreciate that.” 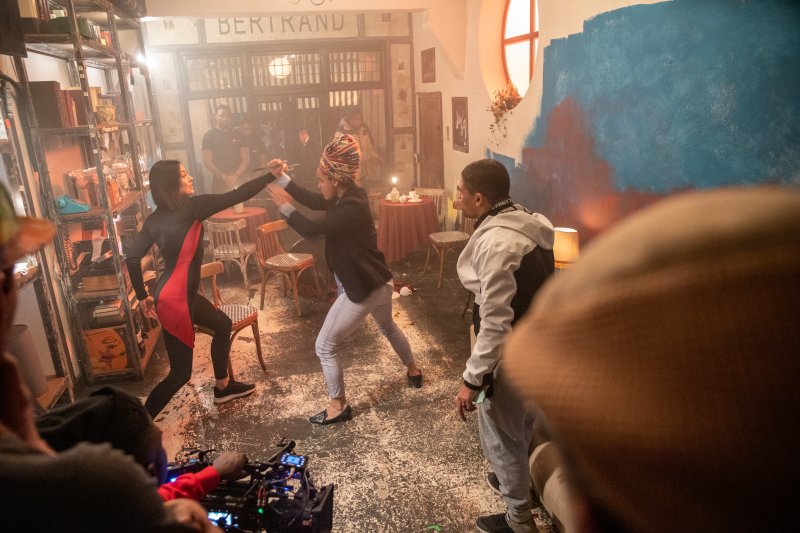 Lediga also aimed to override stereotypes of Africa and its peoples in a distinctly tongue-in-cheek manner, inherited from his experience creating and directing Late Nite News, a satirical South African TV show. “What we tried to do with Late Nite News was speak truth to power in a funny way, and to try and create a kind of release for the public,” says Lediga, who has a background in stand-up comedy. The show has since garnered two International Emmy nominations and two of the writers have gone on to work on Trevor Noah’s The Daily Show.

In Queen Sono, that sense of humor takes its references from the headlines. “Where are we now, some f-cking sh-thole in Western Africa?” says one character in indignation during crisis talks with the South African president. It’s a deliberate echo of remarks U.S. President Donald Trump made in 2018, referring to Haiti, El Salvador and several African countries. But from Lediga’s perspective, there’s another subtext to that sentiment, one of xenophobia and condescension toward others on the continent. “For South Africans, there was a lot of isolation because of apartheid, so this idea of ‘Africa’ is always vague,” says Lediga. “South Africans, both black and white, almost have this European or western notion of Africa. It was important for me to say that we are all on this continent together.”

The legacy of apartheid is also depicted through the disparities in South Africa’s living standards; the country has one of the highest inequality rates in the world owing to the legacy of apartheid. Queen’s late mother is remembered as a revolutionary freedom fighter; that struggle outlives her as terrorism and conflict exacerbate the divide between rich and poor. A confrontation between two characters sees Queen whisper to her colleague that “the white Europeans are fighting over what’s best for Africa,” and the name of Superior Solutions, the company headed by the series’ main antagonist, sardonically invokes a history of white supremacism. “It’s important to show the contemporariness of the African narrative,” Lediga says. “Telling a story like this makes it urgent, makes it present.” 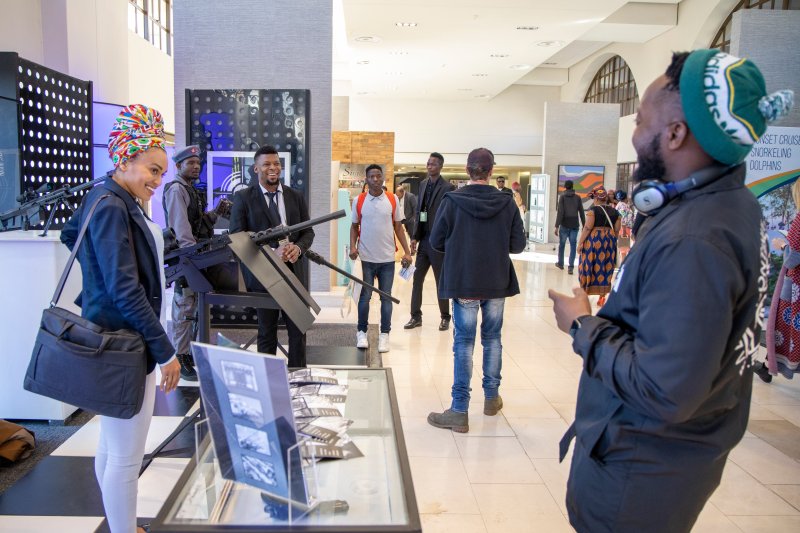 On the set of ‘Queen Sono’

The series arrives as American audiences — and platforms like Netflix — are paying greater attention to international storytellers, who are in turn are receiving long overdue critical and commercial recognition outside of their home countries. “It’s totally heartening,” says Lediga of the current moment for international filmmakers. “Obviously there’s been American cultural hegemony. Americans have been very successful in selling their culture and distributing their content abroad, and I think now, they’ve saturated their own markets.”

Earlier this month, South Korean director Bong Joon-ho’s Parasite became the first foreign language film to win Best Picture at the Oscars in its 92 year history. Last year, Atlantics by Senegal’s Mati Diop and Lionheart from Nigeria’s Genevieve Nnanji were released by Netflix to international acclaim. Atlantics was selected to compete for the prestigious Palme d’Or at Cannes Film Festival in 2019 (an honor that eventually went to Parasite), and Lionheart was initially chosen as Nigeria’s first-ever Oscar submission for best international feature film, though it was later disqualified in a controversial decision relating to the amount of English dialogue in the movie. This week, Netflix announced its first Nigerian original six-part series, which will be set in Lagos.

“The big message we want to communicate to talent is you don’t have to leave home to get big audiences, and you don’t have to choose Hollywood versus your own country,” said Erik Barmack, Netflix’s vice president of international originals, in 2018, according to Variety. He added that shows with multinational casts would soon become the norm. That message of democratizing the industry has resonated with Lediga, whose debut feature film Catching Feelings was released on the platform that same year. The dark romantic comedy was originally intended as a “humble story,” aimed at the festival circuit and getting Lediga noticed as a filmmaker, but he says the reaction when it was picked up by Netflix led him to new opportunities, like Queen Sono.

The challenge of creating Queen Sono, then, brought greater expectations and more pressure to translate a story rooted in South Africa for not just the continent but also global audiences. Netflix is no doubt looking to woo audiences in Africa, itself a vast continent of 54 countries. But the platform is now available in 190 countries, and by the end of 2019 had surpassed 100 million paid memberships outside of the U.S. For Queen Sono, Lediga’s writing team built on the story of South Africa’s past under apartheid, told through the life of a relatable and flawed contemporary protagonist. “You don’t want it to be this insular story that only makes sense to people in Johannesburg or people in the southern African region,” says Lediga. But it also does a creator no favors to play so hard to the universal that the story loses what makes it compelling in the first place. “The more specific you are, the more authentic a story is,” says Lediga. “The rest is trying to make it clearly understandable.”