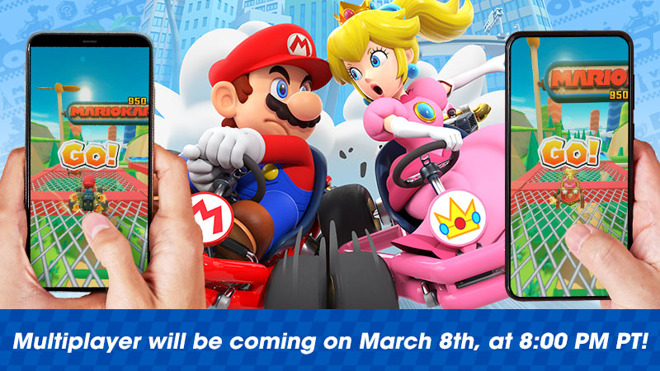 According to a tweet posted to Nintendo’s official Mario Kart Tour account, the upcoming mode supports up to eight simultaneous players including “in-game friends, nearby, or around the world.”

Nintendo breaks down three multiplayer game options in a separate tweet. Players can challenge friends or other nearby players to games with custom rules. A second option, called “Standard Races,” pits players against other other gamers around the world in races with two sets of rules that change daily. Finally, “Gold Races” are restricted to Mario Kart Tour Gold Pass subscribers and allow users to compete in races with four sets of rules that change daily. Rank, or “grades,” are applied to Standard and Gold Races based on performance.

Testing of the multiplayer system commenced in a closed beta round in December and was followed by public testing in January.

Multiplayer competition has been a defining feature of the Mario Kart franchise since its launch on the Super Nintendo Entertainment System in 1992 and its absence on mobile was viewed by some as a hindrance to adoption. Currently, players are limited to racing against AI bots, with in-game incentives like character unlocks and parts pushing users to continue play.