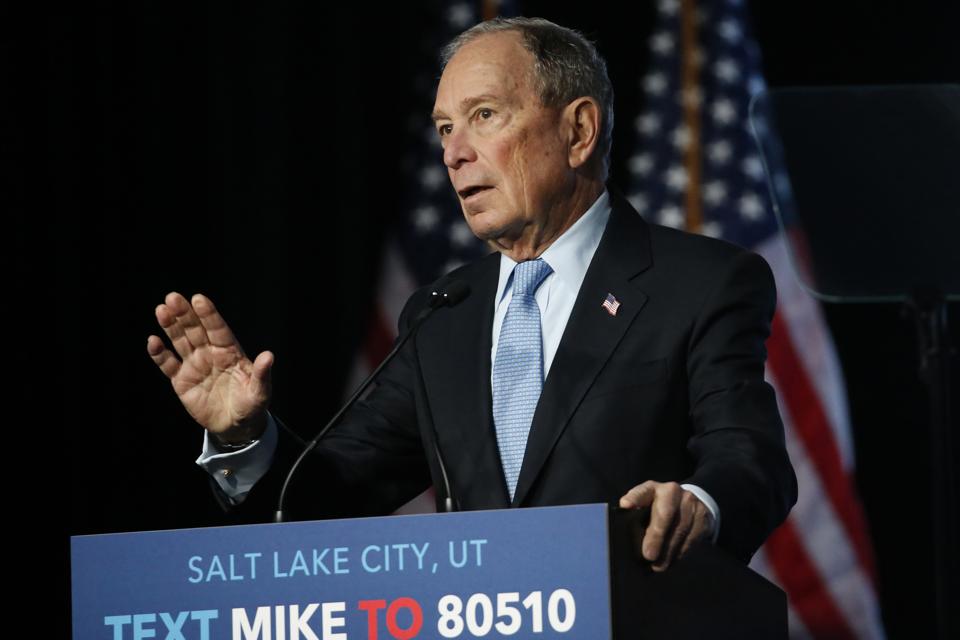 Former New York City Mayor, business leader and philanthropist Mike Bloomberg was a comparatively late entrant into the race for President and has strategically skipped a few of the early primary and caucus contests. Accordingly, his plans and proposals for higher education are a rather recent addition to the policy discourse.

As I’ve done for others (Warren and Sanders, as examples) here’s a review and analysis of what Bloomberg has to say about the status and future of our institutions of higher education.

Given his success in business it’s not too surprising that Bloomberg heavily links college with outcomes such as career, employment and earnings. That’s disappointing as education is so much more than just economics and so much more valuable than financial gain.

Bloomberg, for example, paints higher education with the same broad and misleading brush used by his fellow candidates. The “current system,” Bloomberg’s plan says, “is not fulfilling” the promise of social mobility. His plan links debt and work outcomes, outright saying that “Americans owe over $1.5T in federal student loan debt, and employers say many graduates haven’t been taught the skills needed for workplace success.”

Don’t misunderstand, every other candidate does a form of this too, and it’s a popular applause line. But it’s misleading. For example, a sizeable portion of student debt – somewhere around 40% – is for post-graduate study, doctors and lawyers and PhDs and such.  And the size of individual, per-student federal loans has actually gone down in the past decade. And what “employers say” about the outcomes of college may be insightful and relevant but should not be determinative.

Repeating that idea by saying higher education funding is “not aligned with labor-market outcomes,” Bloomberg specifically endorses the “College Transparency Act” which would collect data on “student outcomes” in order to “measure institutions’ improvements.” The metrics would include graduate earnings, economic mobility and loan repayment rates. It’s a bipartisan plan – Sen. Warren is a sponsor – that many private and liberal arts institutions oppose because measuring colleges by career outcomes misses point of college almost completely.

The money in and money out, business philosophy is troubling. Even so, Bloomberg’s plans are surprisingly detailed in places and innovative in others. His plans take a broadly progressive and pragmatic view of many of the challenges in higher education. They are not perfect, but if enacted, they would do a world of good for colleges as well as current, former and future students.

Perhaps the biggest impact is what Bloomberg proposes for Pell Grants, the direct aid for low income students that have been the largest and most successful federal higher education program.

While both Sanders and Warren call for more Pell funding, Bloomberg expressly wants to double Pell Grants. Doubling Pell would directly aid the most in-need college aspirants and it’s difficult to overstate what a benefit that would be for students and schools alike.

Also, and like other candidates, Bloomberg wants to make applying for a Pell Grant easier, but he uniquely calls for “notifying families of Pell eligibility as part of the income-tax return process.” He also wants to expand Pell access to include undocumented “DREAMers” and those who were formerly incarcerated. All of that is good, solidly progressive policy with real impact – getting more low income students into and through college.

Unlike other candidates, Bloomberg does not call for free, four-year college for everyone. Those plans are popular, but problematic.

Instead, Bloomberg wants to make two-year colleges tuition free for everyone and debt free for low income studiers. Bloomberg wants four-year schools to be likewise both tuition and debt free for low income students. And, importantly, Bloomberg recognizes the significant difference between tuition and other costs of college, things such as food, childcare and housing, and aims to lift that burden for “low income” students – a feature a campaign spokesperson was rightly eager to highlight.

Bloomberg also proposes a 2-for-1 “federal-state funding partnership to boost states’ investments in higher education.” There’s no price tag or payment proposal to go with it but that’s probably just fine because the eligibility requirements he proposes are fanciful. That’s probably just fine too because reading between the lines, the 2:1 match program seems designed to signal that Bloomberg knows that a major driver of tuition inflation and student debt is disinvestment – budget cutting – by states.

To get the Bloomberg match money, states would have to, “reverse disinvestments and meet maintenance of effort requirements and keep the full cost of attendance from rising faster than inflation.” The Bloomberg team was optimistic the financial enticement and public pressure would work to get states to the do right thing. I think, fat chance. But kudos to Bloomberg for trying.

Like his fellow Democratic nominee-seekers, Bloomberg calls for more investment in HBCU – historically black colleges and universities and similarly positioned, minority-serving schools. Unlike the others though, Bloomberg wants to invest some of that money specifically in facilities upgrades and forgive debt used for capital campaigns. That’s a smart, targeted approach that’s better than just promising more money.

Finally, where Sanders’ plan for free college would likely destroy the system of private colleges, Bloomberg wants to “invest directly in private colleges and universities” with a focus on those doing a good job of serving Pell (low income) students and those with high completion rates.

That’s a strong and downright liberal declaration. Since legacy admissions calcify class, it’s probably necessary too. But his actual plan says he’ll, “call for an end to giving children of alumni advantages” in admissions. That’s different. And less strong.

Related, Bloomberg is right in highlighting the pernicious persistence of links between college attainment and wealth, especially at elite schools. His plans to address it by getting more poor students to apply to elite schools are adequate, if uninspiring.

The campaign also lays out some of Bloomberg’s ideas for boosting college completion rates, though they are not overly specific. Bloomberg calls for, “investing in evidence-based strategies to improve completion and success rates” – whatever those are. And he’ll “also encourage programs to re-enroll and graduate adults who have some college but no degree,” whatever those may be.

His plans do include two points that would boost college success, “micro-completion grants for at-risk students close to graduation” and “credit for prior learning.” Both are sensible, especially the mico-grants, which would do some real good.

Also differentiating himself from his rivals, Bloomberg does not propose to eliminate all student debt. And yet, he quietly kind of does, at least for undergrads.

First, Bloomberg says he will enter all student borrowers in the existing income-based repayment (IBR) program that caps loan payments to a portion of your income. Then, he’d cut that cap in half, down to 5% of a borrower’s discretionary income from the existing 10%. Then, if you’d paid for 20 years and have income of less than $250,000, the loans are forgiven outright – and importantly, tax-free.

The tax feature is an important one. A Bloomberg representative called the hidden tax implications of different debt forgiveness plans a “tax bomb.” That’s probably right, good for them trying to avoid it.

That’s a reasonable yet “holy cow!” plan that has not attracted nearly enough attention. It’s phased-in, income based and achieves the goal of lowering the debt burden for learning while not blowing a trillion dollar whole in the budget all at once.

Further, the Bloomberg plan proposes to “cancel” the balances of student borrowers “who went to failed or predatory for-profit colleges.” That’s important, although it does not address the trend of for-profit colleges claiming not to be. Other candidates don’t either.

Bloomberg also wants to “ban wage and Social Security garnishment and confiscation of tax refunds for defaulted borrowers.” Good, sign me up.

Bloomberg also wants to, “create an innovation fund to encourage states and colleges to evaluate and scale strategies to reduce costs while increasing access to instructional quality and student supports.” That may sound like pleasant-sounding gibberish but those with a higher ed ear may read “reduce costs while increasing access” and hear “online.”

If that’s what Bloomberg means, that would be a shame. The last thing higher education needs is more online programs.  Even though people think they do, they don’t cost less. They are rampant with fraud and quality issues, are over-run by profit-seekers and have never been shown to work.

He also proposes to “pilot expanding Pell grant eligibility for quality, short-term training programs demonstrating strong outcomes.” He probably means programs such as coding bootcamps and career training centers and, if he does, that’s another terrible idea. Too much federal money already flows into the pockets of investors in private, for-profit companies. Thank goodness he only proposes a pilot.

The former Mayor also specifically calls for reinstating the Obama rule requiring that for-profit colleges, in order to be eligible for federal aid and loan funds, show their graduates actually get jobs. Known as “Gainful Employment,” Trump’s education team repealed it. Reinstating it as a control against for-profit colleges is the right policy but it’s not far enough. On this point, only Senator Warren has gone far enough, calling for an outright ban on for-profit colleges and their investors receiving federal dollars.

On balance, the Bloomberg plans on higher education are thoughtfully balanced. Where they err too far in linking education to business and economic outcomes, they counterweigh with generous, open funding boosts, including an attempt to reinstate state funding cuts. Bloomberg feels – and is literally – personally invested in issues of college access, which is great. And his call for ending legacy admissions is bold. As is his plan on education debt elimination.

To some, Bloomberg’s plans to make some college free for some may not go far enough. What he proposes, though, is a nice middle ground – a big step on the path to free universal college. And in true progressive form, the benefits Bloomberg proposes are aimed at those who need them most.

Bloomberg isn’t the only candidate with a good higher education plan. Warren in particular is more thoughtful and progressive in some areas but Bloomberg surrenders little on progressiveness while winning handily on pragmatism and plausibility.