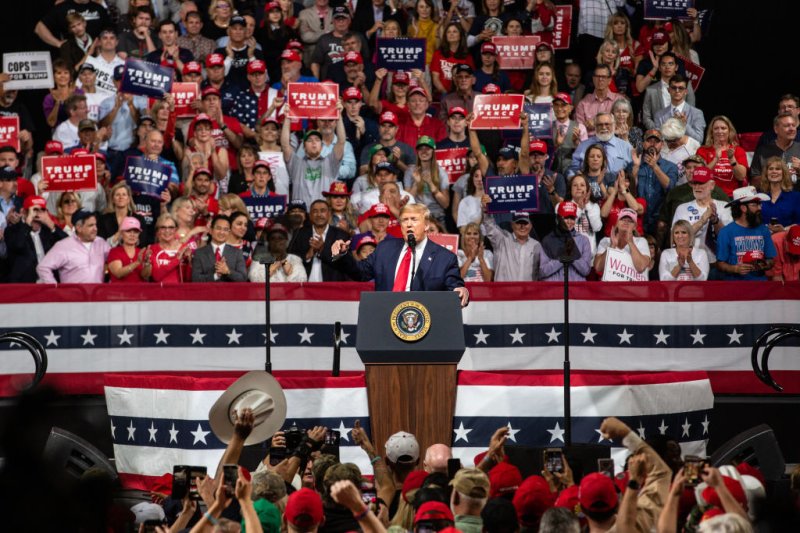 President Donald Trump speaks at a rally at the Arizona Veterans Memorial Coliseum on February 19, 2020 in Phoenix, Arizona.

(TUCSON, Ariz.) — The owners of a Mexican restaurant in the Tucson area are fending off social media attacks after appearing in the VIP area at President Donald Trump’s Phoenix campaign rally in February.

The Arizona Daily Star reports that a Facebook group posted a screenshot image from the rally that showed Sammy’s Mexican Grill co-owner Betty Rivas standing behind Trump, donning a red cowboy hat emblazoned with “Latinos Love Trump.” The newspaper says the post attracted more than 230 comments about the restaurant north of Tucson, almost all of them negative.

Rivas said he and his wife posted a video on Facebook on Thursday defending their rights as “naturalized American citizens” to vote, support and meet whomever they please. “Just because we are Latinos, it doesn’t mean that we have to feel like every other Latino in this country,” Rivas said in the video. “We are individuals and we feel that we have the constitutional right to meet and support whoever we want.”

Jorge Rivas said the online attacks have had little to no impact on the restaurant’s business, which he and his wife opened in 1996.

The people posting negative comments about Sammy’s “are just wasting their time,” Rivas told the Daily Star. “They are not going to achieve their goal of running us out of business.”

Trump on Sunday tweeted support of the Rivas’ restaurant, although he got its location wrong.

“The food is GREAT at Sammy’s Mexican Grill in Phoenix, Arizona,” Trump’s tweet said. “Congratulations to Betty & Jorge Rivas on doing such a wonderful job. I will try hard to stop by the next time I am in Phoenix.”