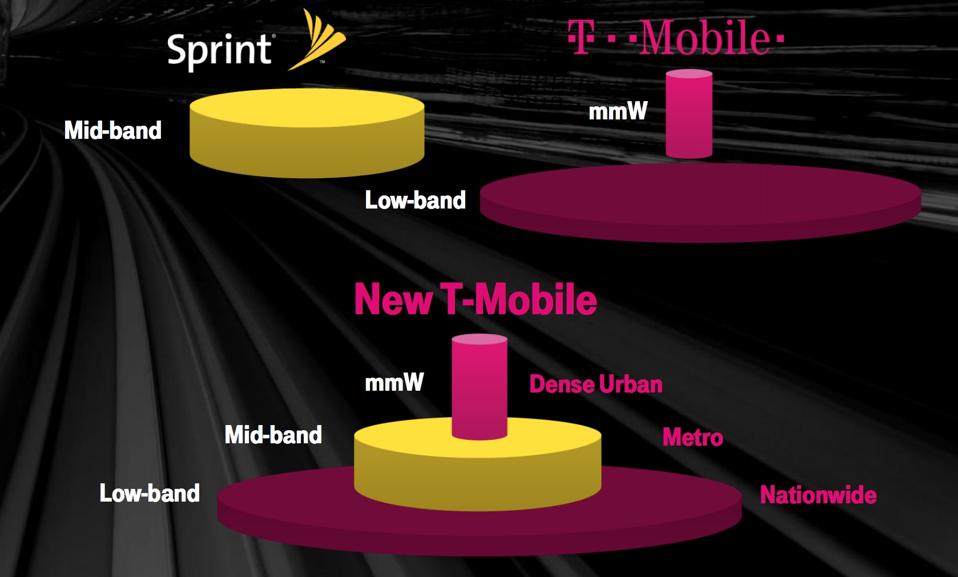 The combined T-Mobile/Sprint is the only U.S. carrier to have active networks with low-band, … [+]

It’s been a long time coming, but with the recent federal court decision to allow the T-Mobile/Sprint merger to go through, we’re arguably on the cusp of a very important boost in 5G adoption and awareness in the U.S.

The reasons are many, but there are a few that are critical. First, while there’s been a lot of discussion (both for and against the merger) about details of things like how it will impact the average U.S. citizen’s cellphone bill or whether or not it’s creating a tyrannical oligarchy or what kind of coverage improvements we’ll see in rural America, this merger was ultimately about one thing: spectrum. T-Mobile wanted (and successfully argued that they needed) the precious 2.5 GHz mid-band, sub-6 GHz 5G spectrum that Sprint very wisely acquired rights to many years ago.

Now, as the result of the merger, the new T-Mobile is the first major U.S. carrier to have important frequency assets in all three critical spectrum segments: both the low-band (below 1 GHz) and mid-band (2.5-3.5 GHz) portions of sub-6, and millimeter wave (mmWave). (To learn more about spectrum and more potentially confusing issues about 5G, see “The Top 5 Fallacies About 5G”.) To be clear, the company still has an enormous amount of work to do to fully utilize all those assets, but at least they’ve got currently functioning networks in all three of these bands.

From a global competitiveness perspective, this is really important. Despite early U.S. efforts in adopting 5G and the government’s stated goal of leading in 5G, the U.S. is arguably behind many other countries in its use of 5G. The main reason for this lag, ironically, is the long history of wireless innovations and spectrum usage in the U.S. Specifically, most countries that have started to deploy 5G are doing so with mid-band sub-6 GHz spectrum—particularly 3.5 GHz. The reason? These mid-band frequencies offer a solid blend of potential performance improvements vs. 4G LTE as well as reasonable coverage.

The problem in the U.S. is that many frequencies around 3.5 GHz were previously licensed out to other industries or governmental organizations because of all the wireless innovations that have been going on here over the last several decades. The highly coveted “C-Band” spectrum around 3.5 GHz, for example, was licensed by and is currently being used by many large-dish satellite TV services. In addition, the U.S. Dept. of Defense is currently using many other frequencies in that range. As a result, those frequencies haven’t been available for U.S. telecom companies to use for 5G. (Thankfully, upcoming auctions for access to these critical spectrum assets are expected later this year, but it still may take several years after that before they’re widely available for use on 5G networks.) In many other countries, these mid-band frequencies were not previously allocated to other applications, so it was much easier to make them available to local telecom providers in those regions.

Partially as a result of the “legacy” problem around existing spectrum usage in the U.S. , many of the early 5G efforts in the U.S., focused on mmWave. While mmWave can offer incredibly fast downloads speeds, early deployments have shown that its range is very limited. Plus, practically speaking, mmWave signals are only available outdoors (or inside certain venues, such as stadiums and, eventually, airports, etc.), which limits their usefulness for many people. It’s also technically more challenging to create devices and networks that support mmWave technology. For these reasons, very few countries outside the U.S. are doing much with mmWave 5G, instead focusing on mid-band sub-6.

“As a result of the T-Mobile/Sprint merger, the U.S. now has a carrier working to deploy…mid-band sub-6 signals more broadly, and that, in turn, will likely force the other U.S. carriers to ramp up their efforts in these areas.”

As a result of the T-Mobile/Sprint merger, however, the U.S. now has a carrier working to deploy similar types of mid-band sub-6 signals more broadly, and that, in turn, will likely force the other U.S. carriers to ramp up their efforts in these areas. The net result should be a much more competitive U.S., in terms of 5G deployments, versus other nations around the world.

And from a domestic competitiveness perspective, this development is even more important. Remember that even with the combination of T-Mo and Sprint’s customers into a single entity, the new T-Mobile is still the number three carrier in the U.S., behind Verizon and AT&T. However, these new assets make it a significantly stronger and more viable competitor and will enable the new company to have a more meaningful impact on the overall market.

Yes, there are still some of the practical concerns raised earlier about how the merger could impact the average citizen in the near term, but from a longer-term perspective there’s little doubt that it will drive much greater deployment and adoption of 5G—and right now, that’s an important and badly needed development.

Disclosure: TECHnalysis Research is a tech industry market research and consulting firm and, like all companies in that field, works with many technology vendors as clients, some of whom may be listed in this article.