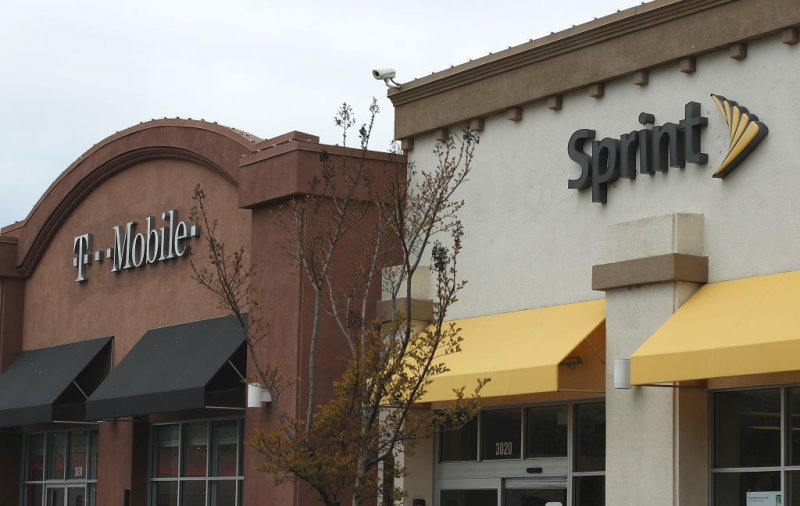 A T-Mobile and Sprint store sit side-by-side in a strip mall on April 30, 2018 in El Cerrito, California.

T-Mobile US Inc. won court approval for its $26.5 billion takeover of Sprint Corp., defeating a state-led lawsuit that sought to block the industry-altering wireless deal.

The decision by a district judge in Manhattan is a huge win for T-Mobile and its owner Deutsche Telekom AG, as well as SoftBank Group Corp., Sprint’s parent. The combined company, which will operate under the T-Mobile name, will have a regular monthly subscriber base of about 80 million — in the same league as AT&T Inc., which has 75 million subscribers, and Verizon Communications Inc., which has 114 million.

After the merger, T-Mobile will have more spectrum — the frequencies through which wireless signals are transmitted — than any other carrier. This larger capacity will give the combined company an advantage as the industry transitions to the next generation of wireless technology, the much-faster 5G standard.

The ruling comes almost two years after the deal was first announced. The states’ lawsuit was the last major hurdle to the deal after it secured the blessing of regulators at the Federal Communications Commission and Justice Department’s antitrust division. It still needs approvals from California’s utility board and a federal judge in Washington who must sign off on the Justice Department settlement.

The ruling is also a victory for Dish Network Corp. co-founder and Chairman Charlie Ergen, who is buying assets from the two carriers to set up a new wireless network. With his company’s core satellite TV business in decline, Ergen has amassed a trove of airwaves to build a state-of-the-art network.

To win federal approval, T-Mobile and Sprint had agreed to sell multiple assets to Dish in order to create a new fourth competitor. The new Dish wireless network will start life with about 9 million subscribers.

T-Mobile and Sprint haven’t renewed the merger agreement since it lapsed on Nov. 1. And while there have been “not hostile” discussions of several issues, including price, T-Mobile has suggested there could be new terms.

T-Mobile Chief Executive Officer John Legere said last week he was still optimistic that the deal would go through, though the terms could change. If the agreement needs to be amended, “including possibly price, we would handle that very swiftly after the deal was approved,” he said.

As far as negotiation leverage goes, Sprint’s in a tough spot, said Walt Piecyk, an analyst with LightShed Partners. “Sprint has no alternative but to take whatever DT and T-Mobile offers them,” he said. “There’s really nothing else they can do.”

T-Mobile and Sprint had been the most aggressive U.S. wireless companies in terms of price competition in recent years, forcing AT&T and Verizon to follow moves like ending service contracts and adopting unlimited data plans. The proposed combination came under fire from lawmakers and consumer advocates who said it would lead to higher prices and fewer services, especially for poor and rural consumers.

The companies had pursued a combination for several years, but a proposed deal was twice rejected as anti-competitive under the previous administration. After the FCC approved the deal, the all-Democratic group of attorneys general filed suit. The Justice Department then gave its approval, leading to a rare split between states and the federal government over antitrust enforcement.

“This is exactly the sort of consumer-harming, job-killing mega-merger our antitrust laws were designed to prevent,” New York Attorney General Letitia James said at the time.

Legere tried to address these concerns by promising to not raise prices for three years. He is credited with helping to remake T-Mobile into an industry maverick, and pitched the Sprint takeover as a way to compete against industry leaders Verizon and AT&T.

Legere announced in November that he will be handing off the job to Chief Operating Officer Mike Sievert in May, but plans to remain on the combined company’s board.

One of their central pitches was that the deal would advance the introduction of 5G. The companies pledged to FCC Chairman Ajit Pai in May that they would deploy a 5G network covering 97% of the U.S. population within three years and 99% within six.

— With assistance from Stefan Nicola, Chris Dolmetsch and Courtney Dentch.