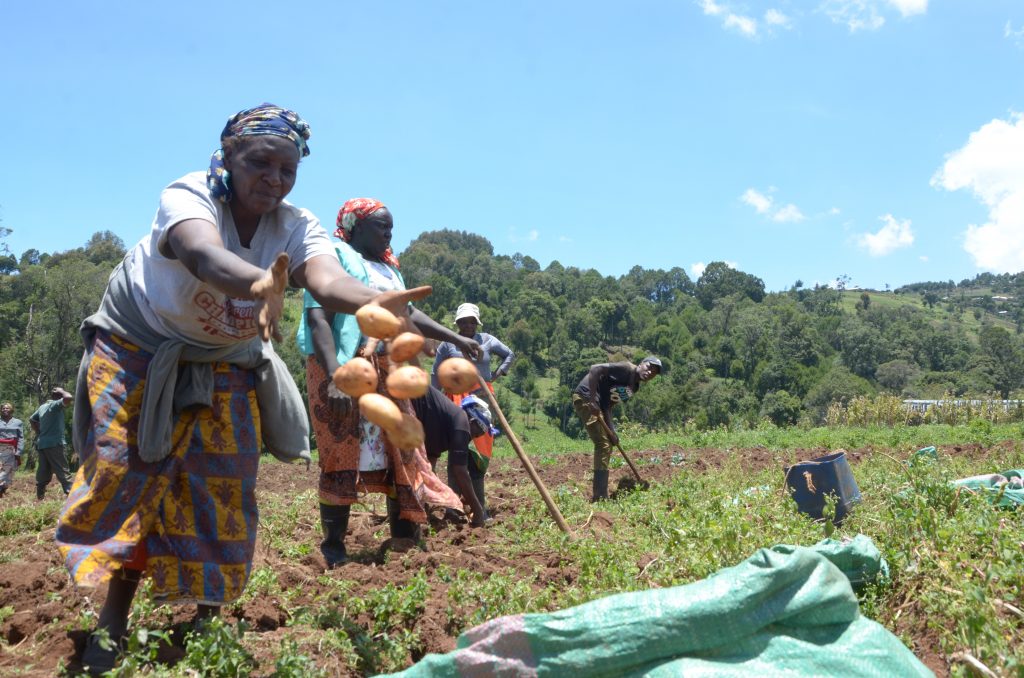 Food table banking is turning the tables on the systematic and systemic financial exclusion of women. Credit: Joyce Chimbi/IPS

NAIROBI, Oct 15, 2021 (IPS) – Pascaline Chemutai’s five acres of land located in the country’s breadbasket region of Rift Valley recently produced 115 bags of maize, each weighing 90 kilograms. She tells IPS that of these, 110 bags will be transported to traders in Nairobi and neighbouring Kiambu County at a negotiated price of $23 per bag.

In all, she will have pocketed about $2,500, a significant amount in the village. Not only will she have enough to feed her family of five, but to pay for their school fees and other basic needs. Besides maize farming, Chemutai sells milk to residents in town.

The 45-year-old farmer widowed eight years ago with five young children says that her life as a farmer was made possible and is sustained through table banking.

“My husband was in charge of our farm and handled all business related to the farm. I knew how to farm because I grew up cultivating land, but I had no money to buy seeds and fertilizer or knowledge on the business side of farming,” she says.

Fortunately, a year before the demise of her husband, Chemutai joined a table banking group under the Joyful Women Organization (JOYWO), a registered NGO focused on the economic empowerment of women.

As the name suggests, women place their savings on a table and immediately loan each other accumulated funds.
“Women knew of village saving groups where contributions were spent on household items such as cups, plates and even beddings. We were now learning about saving and borrowing,” she says.

Sharon Alice Anyango says that the simple concept of table banking, where a group of 10 to 35 members use the group-based strategy to fundraise by saving, placing their savings on a table, and borrowing immediately, has turned tables on the systematic and systemic financial exclusion of women.

“Table banking is addressing the primary challenges that women face when dealing with banks and other financial institutions. Where they needed collateral that they did not have to access bank loans, today, they successfully fundraise amongst themselves,” says Anyango, a project officer at the Ministry of Public Service, Youth and Gender.

JOYWO, whose current patron is Rachael Ruto, the wife of Deputy President William Ruto, claims to have a revolving fund of at least $27 million in the hands of its estimated 200,000 members across 1,200 table banking groups in all parts of the country.

“Other estimates show that so popular is the table banking movement that cumulatively, table banking groups throughout the country circulate approximately $550,000 to $730,000,” Anyango says.

She explains that only women were involved at the start, but as they started to accumulate funds, men became interested.

“Men have seen the magic,” she says.

Now the table banking fraternity allows men to join, but the groups’ constitutions ensure that at least 70 percent of the members and all the leadership positions are women.

Chemutai says that their table banking group of 20 members currently has a revolving fund of $30,000. She has taken loans valued at $2,000 to fund various farming and animal husbandry ventures in the last year.

“Seeds, fertilizer, labour, tractors and veterinary services, salary for my farm boy and feeds for my cows cost a lot of money. I borrow from the group and repay, and this cycle repeats itself every year, and all my activities are running smoothly,” she tells IPS.

Chemutai’s story is in line with research from the Barilla Center for Food and Nutrition that points to “a high probability that any agricultural product that we buy has been produced by a woman. Women’s contribution is essential for the food security of entire communities and for the farming production of many developing and rural communities.”

The research further points to the many gender disparities that prevent women such as Chemutai from accessing financing. On paper, Chemutai does not own an asset to be used as collateral despite having access to five acres of land because the land is ‘ancestral’ land.

As per the Barilla Center for Food and Nutrition and undoubtedly true for many women in agriculture, “when women are guaranteed the same access as men to community resources, services and economic opportunities, production increased, the economic and social benefits of the community improve, and malnutrition and poverty are reduced.”

Celebrated every October 16, as the global community marks yet another World Food Day under the theme “Our actions are our future. Better production, better nutrition, a better environment and a better life”, gender experts, such as Anyango, tell IPS that this is the level of access that women need to feed the global population.

Agriculture is still the largest employment sector for 60 percent of women in Sub-Saharan Africa. Women like Chemutai also make up two-thirds of the world’s 600 million small livestock managers, according to the U.N’s Food and Agriculture Organization (FAO).

Despite their contribution to agriculture, financing is still largely not affordable, available, and accessible to women farmers. In this East African nation where the table banking movement is more concentrated in rural areas, women now have a lifeline to fund agricultural activities with loans taken under friendly terms and conditions.
Anyango asserts that women must be at the centre of World Food Day’s collective action across 150 countries to promote worldwide awareness of global hunger and the need to ensure healthy diets for all.