The Corner of N.Y.C. That’s Overrun by Deer, Turkeys and Feral Cats - iCrowdMarketing

The Corner of N.Y.C. That’s Overrun by Deer, Turkeys and Feral Cats

Some Staten Island residents would like to hunt deer to reduce their numbers, but the city is pushing a vasectomy program. 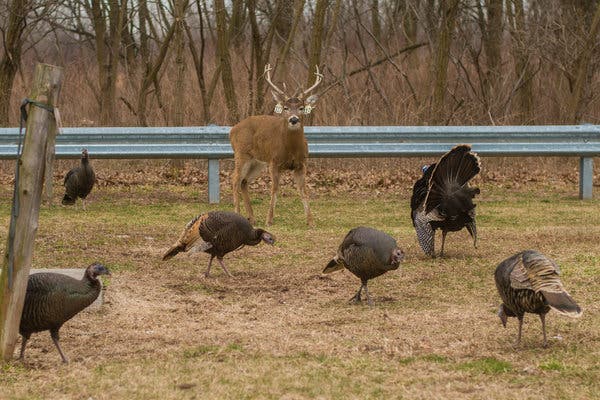 On Staten Island, deer cause dozens of collisions with cars, while residents say wild turkeys are aggressive and damage yards.Credit…Andrew Seng for The New York Times

You would think that Staten Island has plenty of room to share space with wildlife.

After all, it is New York City’s least populous borough, with three times fewer residents than Manhattan, and half the city’s parkland is on Staten Island.

Yet the way locals describe it, the borough is ground zero for unwanted visitors who are proliferating so abundantly that they turning into urban pests.

First, there are the deer — many of whom, residents say, swim across from New Jersey — and eat seedlings, damage woodlands and cause dozens of collisions with drivers every year. Then there are wild turkeys, which can be aggressive and trample over yards, and feral cats that urinate on lawns, leaving foul odors.

“They’re pretty rough,” said Rob Sosa, 51, who says he has spent a small fortune on cameras and a high-tech sprinkler to scare off the deer and turkeys that invade his property with impunity. “We’re alarmed.’’

One ornery turkey even tried to get in his house, he said. “This son-of-a-gun was trying to break my window.”

Residents have tried various ways to ward off the unwanted visitors, from putting up fencing to concocting homemade deer repellent using hot sauce.

Mr. Sosa has taken to throwing shoes at the turkeys that perch on trees and keep him awake with their nocturnal yelps. 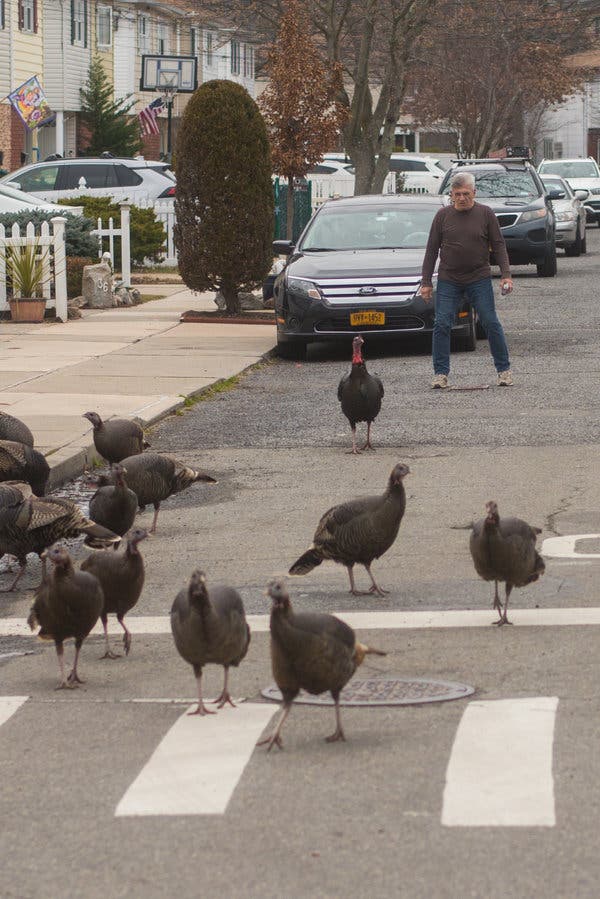 Carl Masinski trying to keep turkeys away from his home. Their yelps disturb residents’ sleep.Credit…Andrew Seng for The New York Times

As for the cats, animal shelters say they are overflowing with strays and their litters.

The deer, seen over much of the island, have become a particularly vexatious issue, dividing residents and officials over the best strategy to contain them: to cull or sterilize.

While state officials are open to the idea of allowing a limited cull, the city seems reluctant and instead remains committed to a vasectomy program that it is financing.

The debate heated up recently after a local congressman took on Mayor Bill de Blasio, who supports sterilization. Representative Max Rose, a Democrat who represents Staten Island, said sterilization was doing little to address the problem, and a controlled hunt would be preferable.

“I’ll build a little hide for myself,’’ Mr. Rose, an Army veteran, told the Staten Island Advance. “I’ll go back to my glory days, and I’ll start taking down some of these deer.”

In a separate interview with The Times, Mr. Rose said, “We have to deal with this problem. You can’t put all of our eggs in one basket.”

And for good measure, he added, the turkeys also needed to be dealt with because they were “disrupting people’s daily lives.’’

Mr. de Blasio told reporters that Mr. Rose needed to take his concerns to the Police Department. “They are very much opposed to hunting taking place in a borough with half a million people in close proximity to each other,” the mayor said.

As for feral cats, they’re not just a Staten Island problem, said Nick Gitto, a volunteer at a Staten Island animal shelter. “They’re everywhere, and they’re going to pee on people’s lawns,” he said.

The number of turkeys has also ballooned over the years, and on a recent visit many were concentrated on the grounds of Staten Island Hospital, their tails fanned out.

But it is the deer that really have gotten on people’s nerves — a problem that is not confined to Staten Island.

Across the country, there are an estimated 30 million deer that eat the equivalent of 15 million metric tons of vegetation every year — greater than the combined weight of all the aircraft carriers in the Navy, according to Tom Rooney, a biological sciences professor at Wright State University in Ohio. 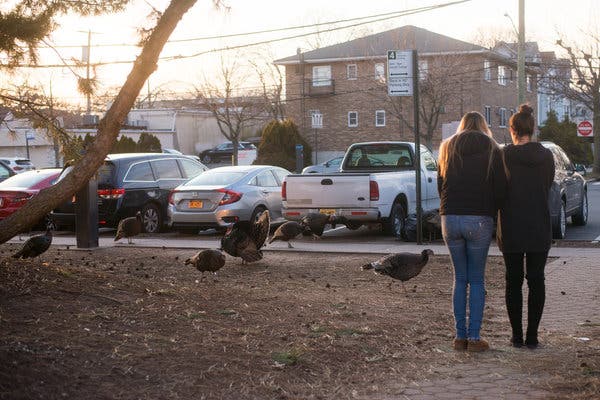 Turkeys near Staten Island Hospital, whose grounds are one of their regulars haunts.Credit…Andrew Seng for The New York Times

Deer nearly became extinct a century ago because of overhunting and natural predators, he said. Today, if there were no control efforts, the deer population would double every two years.

“In some places, deer are responsible for the disappearance of over half of all plant species in just a few decades,” Mr. Rooney said.

The vasectomy plan “is showing signs of success,” said Sarah Aucoin, chief of wildlife and education at the city’s Department of Parks and Recreation.

With the city’s program “trending in the right direction,’’ Ms. Aucoin said, “killing hundreds of deer is our very last option.”

Still, critics said that the decrease in deer population is relatively modest and that the animals still posed a nuisance.

“Definitely not worth the plus-$4 million spent,” said Paul Curtis, a professor of natural resources at Cornell University, who has worked on reducing human-wildlife conflicts in suburban settings. “Deer culling would have likely shown measurable and significant declines in deer-and-vehicle collisions much quicker at a lower cost.”

Animal rights groups have opposed deer culls as a cruel response to overpopulation.

“It’s a terrible message to especially children that slaughtering any species of wildlife is a solution, said Edita Birnkrant, executive director of NYCLASS, an animal welfare group.

State and city officials have discussed the idea of allowing a controlled hunt on Staten Island but so far have not made a decision. The state owns some property on the borough where it could permit limited hunting, but for a cull to be effective it would also have to encompass city-owned land. 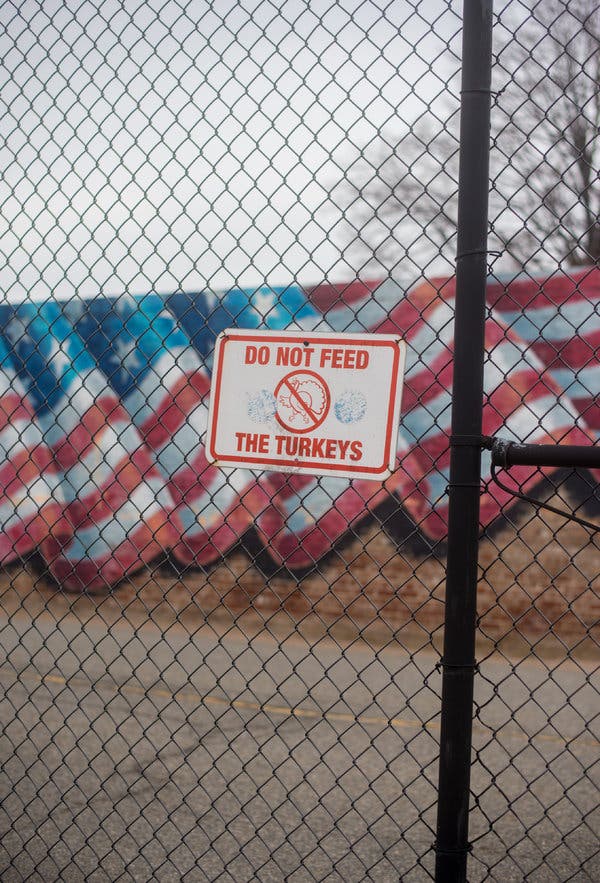 Turkeys can be aggressive, and officials urge Staten Islanders not to encourage them.Credit…Andrew Seng for The New York Times

Rodney Rivera, a special assistant in the state Department of Environmental Conservation office that oversees New York City, expressed doubts about the city’s reliance on vasectomies.

“Whether or not this effort will be adequate to reduce deer numbers to levels where they do not present threats to forest health, wildlife ecology, and public health and safety remains to be seen,” Mr. Rivera said. “Since the deer life span exceeds 10 years, the full effect of this effort will not be realized for many years, and during that time negative impacts of an overabundant deer population will continue to occur.”

Other communities have combined sterilization programs and culls and have been able to make a major dent in their deer population.

Cayuga Heights, a village near Ithaca in central New York, has reduced its deer population to about 10 per square mile from 125 per square mile a decade ago since it started using both deer control measures.

“They’re a lot of fun when you see one or two a season, but when you see five or six in your backyard eating everything everyday, it’s not,” she added. “My biggest recommendation is that you can’t just do it in one year. You have to commit to doing it on an annual basis.”

On Staten Island, Brian Creagh, 70, who lives near a park at the southern tip of the borough, said he would shoot deer himself if he were allowed to.

“It’s only a matter of time until there’s an auto disaster,’’ he said. “Deer are big, and when they panic, they scatter.”

Deer have eaten his tulips, impatiens and even so-called deer-resistant shrubs, he said. “They ate those last, but they still ate them anyway.”

His neighbor, Frank Olivo, however, came to the defense of deer, even though he said he has spent a few thousand dollars redoing his front garden.

“They’re hungry. What do you do when you’re hungry? I would never kill them,” he said. “They’re too beautiful.”