The Rape of India’s Dalit Women: It’s All about Gender & Class Subordination - iCrowdMarketing

The Rape of India’s Dalit Women: It’s All about Gender & Class Subordination 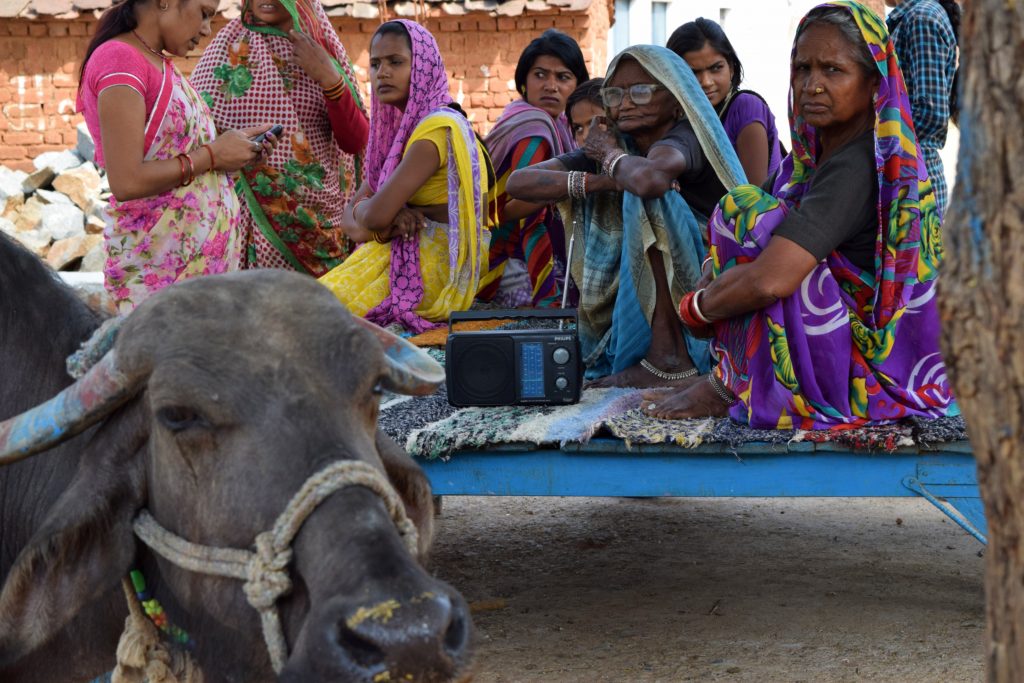 Women listen to the news in a village comprising mainly of Dalits in Uttar Pradesh. After a 19-year-old young woman was murdered and raped in the state last month it triggered nationwide protests. Credit: Stella Paul/IPS

HYDERABAD, India , Nov 2 2020 (IPS) – Shabnam*, a young woman from Northern India’s Haryana state, is two years away from becoming a law graduate. She sees parallels between her own rape and that of the 19-year-old Maha Dalit woman whose brutal rape and torture by a group of men from a “dominant” or “higher” caste in the neighbouring state of Uttar Pradesh triggered nationwide protests.

“She was a Valmiki like us, from a landless and poor family like ours. They raped her, brutalised her and when she died, they burnt her body without the consent of her family. And even after all of that, they would not allow her family to talk about it and threaten them to keep quiet. This is exactly what I and my family have experienced and what we continue to go through. The only exception is that I am still alive,” Shabnam tells IPS in Hindi. The 19-year-old young woman eventually died of her injuries. But just like her, Shabnam also belongs to the Maha Dalit – India’s most marginalised and oppressed community formerly known as “untouchables”.

The death of the young woman focused a spotlight on the sexual violence faced by Dalit women in India, who number some 100 million according to a discussion document by Navsarjan Trust (India), FEDO (Nepal) and the International Dalit Solidarity Network. According to the document, Dalit women are subjected to “violence and inhuman treatment, such as sexual assault, rape, and naked parading” as a mechanism to maintain their subordinate position in society.

Shabnam was a minor when she was gang raped in 2013. Over the past seven years, even as her case has gone to trial, there have been several attempts and threats on her life for which she was eventually granted court protection.

“People think rape is a single crime. But for Dalit rape victims, it’s just the beginning of a lifelong chain of crimes and struggles: mental abuse, fear, intimidation, threats, denial of basic rights, denial of education and a decent livelihood – the list is very long. In fact, once you are raped, you stay a victim all through your life,” Manisha Mishaal, a Dalit women’s rights defender and lawyer who is helping Shabnam and many other young women in their fight for justice, tells IPS in Hindi.

Violence against Dalit women – what are the true numbers?

According to the National Crime Record Bureau (NCRB), a federal agency, cases of physical attacks on women have been increasing.

In 2019 alone, says NCRBs latest report, there were over 405,861 cases of assaults on women — 7 percent more than was reported in 2018. The crimes include beating, stripping, kidnapping and rape.

Of these, 13,273 assaults, which included 3,486 cases of rape, were against women from Dalit communities.

Jacqui Hunt, the Europe and Eurasia Director of the global non-profit Equality Now, which promotes human rights and equality and studied sexual violence against Dalit women in Haryana, says widespread under-reporting and problems registering sexual assaults with the police mean that the true figures are likely to be considerably higher.

“As a consequence of gender, caste and class inequalities, Dalit women and girls are subjected to multiple forms of subjugation, exploitation, and oppression. Sexual violence, including rape and gang rape, has been perpetrated against them by men from dominant castes as a mechanism that reinforces India’s deeply entrenched structural hierarchies. Women’s bodies are being used as a battleground to assert caste supremacy and to keep women ‘in their place,’” Hunt tells IPS.

Mishaal believes that almost 80 percent of Dalit women who are raped do not report the crime because of political and social pressure as the women and their families are usually threatened by the perpetrators. Besides, Mishaal says, a majority of the sexual and gender-based violence (SGBV) survivors are minor Dalit girls, while NCRB data for child rape survivors does not differentiate according to caste.

A safe space for Dalit women

To help break the cycle of silence on crimes against Dalit women and girls, in 2013 Mashaal founded the Swabhiman Society – a charity that provides various services, including legal and psychological support to Dalit survivors of SGBV.

“We currently have 25 women who work with us off and on, but this is a safe place for hundreds of women who have been stigmatised, brutalised and yet have nobody else to turn to,” says Mashaal.

Mashaal started the society because she noticed few organisations were aiding Dalit survivors of SBGV and that there was a lack of knowledge and awareness among the community about their legal rights to justice or the procedure to follow.

In several cases, they would be dictated to settle out of the court by the Khap Panchayat – a powerful, traditional, community assembly run by the landowning Jat community, which decides on village affairs. The decisions of the Khap are often controversial and considered anti-Dalit, but few dare oppose them fearing reprisals.

Mamta*, another woman Mishaal represents, was a minor when she was gang raped by “dominant” caste men in 2012. When the Khap Panchayat ordered that she had to marry one of her rapists, her father – a farmhand and daily wage earner — was too scared to oppose the decision.

For months Mamta was locked in a small room and repeatedly raped by both her ‘husband’ and his friends and relatives.

“It was like a cage. I lived in a small room. My husband would lock the door from outside. He would not otherwise touch me as I was a Dalit but would forcibly have sex whenever he wanted. Every day, he would bring other men and they would also rape me.

“I was like a fly stuck in mud – I could not live and could not fly away either,” Mamta, who is now 26, tells IPS in Hindi.

Eventually Mamta managed to escape and discovered the Swabhiman Society. There she met many other women who had also experienced similar abuse and brutality. Together they have received counselling, awareness training about laws on rape and sexual attacks on women. But most important of all, they have gathered the courage to demand justice in a legal court.

According to  Hunt, Dalit women lack economic power and are often reliant on dominant castes for their livelihoods. When survivors of sexual assault or their families are dependent for jobs or other sources of income from someone who is from the same caste as an assailant, or the perpetrator is also their employer, accessing justice for sexual violence becomes even more problematic

“Culprits and their associates often wield their economic power to silence survivors and witnesses. This includes coercing survivors or victims’ family members into settling cases out of court, or hounding them from their home and village.

“Our forthcoming report gives an indication of how common this problem is. In almost 60 percent of the cases we studied, survivors were forced into a compromise, many times caused by threats of economic retaliation,” Hunt says.

Independent studies have established this as well.

According to a 2018 study by Reena Kukreja, an assistant Professor at Queens University, Canada, the Dalit community in Haryana, “with over 80 percent of Dalits living in rural areas, they are dependent on the three landowning castes for agricultural wage labour as their primary source of livelihood.” The study explores the link between land rights and gender violence, especially in the context of Dalit women’s marriages in Haryana.

Preparing for a life-long fight

The women Mashaal represents don’t believe there is a silver bullet for the endemic SGBV against women in their community. It is why a number of them are pursuing a college degree, especially in law.

“Every time we go to court, we see the perpetrators hiring 10 to 15 lawyers to fight their cases. They hire big law firms. On the other hand, a Dalit woman victim can hardly afford a single lawyer. It is very frustrating. So, we encourage the girls who come here to go back to school and study law. We must build our own network of women lawyers who will fight and win every single case of Dalit rape,” Mashaal says.

Presently, at least 10 women from the Swabhiman Society are studying law, says Shabnam.

Pooja* is another young Dalit woman whom Mishaal is assisting. When Pooja was only 17 she was kidnapped by 12 men who took turns to rape her. Pooja – the youngest of the women — just passed her last school exams and plans to enrol in a law school. Though her enrolment has been delayed by COVID-19 lockdowns.

“I will apply to a private college if needed and  take up a job to pay the fees, but will not give up on becoming a lawyer,” Pooja tells IPS as Mashaal and the other Dalit women in the room break into a cheering chorus of support pledging to “make sure that happens”.

*Not her real name. Names of some interviewees have been changed to protect their identity.