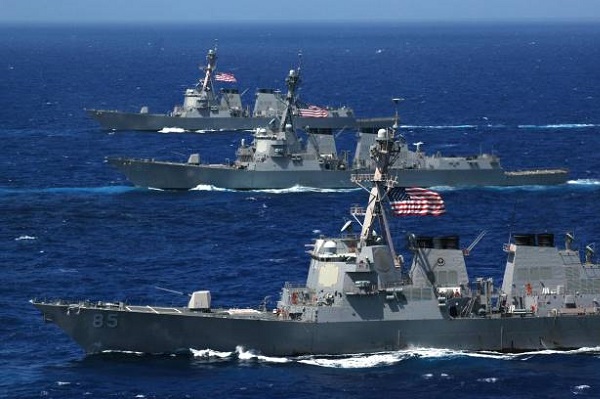 A US Navy Captain of the USS Theodore Roosevelt has been “relived of duty” after he sent a memo detailing coronavirus cases on board the ship.

Captain Brett Crozier of the USS Theodore Roosevelt said in a memo that Navy leadership must enforce stronger measures to control the outbreak on the ship.

Unfortunately, the memo was leaked the The San Francisco Chronicle, as 5,000 sailors on board the vessel has been the site of an outbreak.

The leaked memo reads, “If required the USS Theodore Roosevelt would embark all assigned sailors, set sail, and be tray to fight and beat any adversary that dares challenge the US or our allies.

“The virus would certainly have an impact, but in combat we are willing to take certain risks that are not acceptable in peacetime.

“However, we are not at war, and therefore cannot allow a single sailor to perish as a result of this pandemic unnecessarily.”

Captain Crozier wrote, “With the exceptions of a handful of senior officer staterooms, none of the berthing onboard a warship is appropriate for quarantine or isolation.

“The only effective method to preserve an individual’s health is total isolation for 14+ days in accordance with the NAVADMIN Individual hotel/barracks rooms with separate heads.”

Over 100 sailors have been tested positive for coronavirus on the USS Theodore Roosevelt.

Captain Crozier was accused of raising “alarm bells unnecessarily” and that he exercised poor judgement in not safeguarding the memo from leaks, said the US Navy Secretary Thomas Modly.

Modly said, “I lost confidence in his ability to lead that warship as it continues to fight through this virus, get the crew healthy, so that it can continue to meet its national security requirements.”

Modly added, “he’s being relieved because to me that demonstrated extremely poor judgement in the middle of a crisis.

“because of what it’s done, it has created a firestorm.

US military activity in the heavily contested South China Sea (SCS) has dramatically increased and the risk of a confrontation is increasing.

According to a Beijing think tank, the SCS Strategic Situation Probing Initiative’s annual report claims the US have intensified military operations in waters across the region.

The report says the US conducted eight freedom of navigation operations, whereby the US Navy sail within 12 nautical miles of China’s land.

It also said that the US Navy have engaged in 50 or more joint and multiple military exercises with Southeast Asia in the region.