Why Rehabilitation is as Vital as Rescue for Child Trafficking Survivors SYDNEY, Australia, Mar 29 2021 (IPS) – Twelve-year-old Babloo’s (Name changed) parents, who worked as daily wage agricultural labourers in the eastern Indian state of Bihar, were finding it difficult to feed their family of six. They had recently lost their eldest son to sudden illness, when a distant relative convinced them to send Babloo with him to work in a city. He promised to pay Rs 5000 ($70) a month, a significant amount for the impoverished family.

The relative took Babloo and his 14-year-old cousin from the village and handed them to a trafficker, who took them by rail to Jaipur, capital of the western Indian state of Rajasthan, nearly 1200 kilometre away from their home.

“We were locked in a small room. The windows were sealed and there was no natural light. There were 10 other children already there. We were made to grind glass stones and then stick the stone embellishments and beads on lac bangles from 6am till midnight everyday,” Babloo tells IPS via Zoom from his village in Nawada district in southern Bihar.

“If we slackened out of fatigue, exhaustion or illness, we were beaten with a wooden pole. We would cry in agony and fear for our lives. But we were so terror stricken that we didn’t attempt to escape,” adds Babloo, who was trafficked in 2018 and rescued after six months in 2019.

Extreme poverty, illiteracy and socio-economic inequalities are the main drivers of child trafficking for forced or bonded labour. Traffickers have been manipulating vulnerable rural families by using relatives or giving reference of a relative to gain their trust.

“There is only one breadwinner in some families with six to eight children. These families, seeking a better life, become easy targets of traffickers, who have started recruiting fewer than four children at a time to evade suspicion from authorities,” Kanhaiya Kumar Singh, Director of Tatvasi Samaj Nyas, a Bihar-based NGO, tells IPS via WhatsApp.

Children comprised one-third of the overall 48,478 detected victims of trafficking in 106 countries, according to United Nations Office on Drugs and Crime’s (UNODC) Global Report on Trafficking in Persons 2020.

Though Bihar has formulated a comprehensive action plan, Astitva, for preventing and combating human trafficking and rehabilitation of the victims and survivors, similar fate awaited Ramu (name changed). He was trafficked at the age of 13 years in 2017 with another boy from his village and two others from a nearby village in Nalanda district (Bihar). They were also taken to Jaipur to work in a bangle-making sweatshop.

“We were always hungry because we were given limited food twice a day. If we requested to speak with our family, we were verbally abused and thrashed. I still get nightmares,” Ramu, who was rescued in 2018, tells IPS via Zoom from his village.

These children are amongst the fortunate ones to have been rescued by law enforcement agencies with the support of other government departments and civil society organisations, including the Child Labour Free Jaipur (CLFJ) initiative. CLFJ is a multi-stakeholder partnership, which has been working with the government, businesses, non-governmental organisations and local communities in Jaipur and Bihar to end child labour.

“Children rescued from Jaipur are repatriated to Bihar, where we help them reintegrate in their community with measures such as, enrolling them in school, providing them vocational training, helping them with access to victim compensation and government entitlements, and assisting them and their families to pursue legal cases against the traffickers,” says Abhijit De, Programme Advisor for CLFJ based in Patna (Bihar).

These boys are now part of CLFJ’s Survivors’ Collective, which meets twice a month. “We provide them with skills and training to become advocates for anti-trafficking in their own communities,” De tells IPS via Zoom. 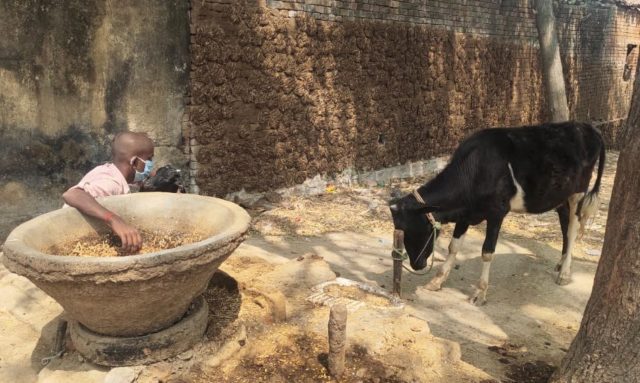 A survivor of child trafficking. Traffickers have been manipulating vulnerable rural families by using relatives or giving references from a relative to gain their trust. [captured via videolink] Credit: Neena Bhandari/IPS

Ramu, who is studying in Year 8, wants to be a policeman. “I want to protect my family and villagers from criminals, especially traffickers, so no child has to experience the torture that I did,” he tells IPS via Zoom. His fellow survivor, Babloo, who has been enrolled in Year 5, wants to become a doctor. “Our village only has a dispensary. The hospital is too far away and many people die for want of proper medical care,” he tells IPS via Zoom.

Another survivor, sixteen-year-old Veer (name changed), who was also freed from a workshop in Jaipur, wants to be a farmer. “We don’t have enough to eat that is why we are easily deceived by traffickers. I want to study agriculture and improve crop production,” he tells IPS via Zoom from his village in Nalanda district.

“If these children can receive their [state] compensation amounts as soon as possible or within six months of being rescued, it would fast track their rehabilitation and further reduce re-trafficking. Now we have less than two percent re-trafficking rate amongst this survivors’ group,” De tells IPS via Zoom.

“Time lag in receiving compensation has been a major challenge,” agrees Sanjay Kumar, Chairperson of the Child Welfare Committee (CWC), Nalanda District. CWC is the statutory body tasked with dealing with children in need of care and protection.

Seventeen-year-old Ali (Name changed), who was trafficked in 2019 from Katihar district (Bihar), was escorted by CLFJ to Jaipur to provide testimony in a court case against the trafficker. “It was terrifying to come face-to-face with the trafficker. He kept making signs, telling us not to say anything against him in court,” he tells IPS via Zoom from his village. Now courts are pioneering the use of video testimony by child survivors of trafficking to provide them effective protection from potential intimidation or retaliation.

“There have been six convictions against child traffickers, four with life sentences between August 2019 and December 2020 in Jaipur. These convictions really send a strong message to deter the traffickers, and it helps everyone to see that child exploitation is no longer accepted and tolerated,” Ginny Baumann, Senior Program Manager with The Freedom Fund, tells IPS via WhatsApp.

In 2019, 27 traffickers were chargesheeted, [A charge-sheet is a final report prepared by the investigation or law enforcement agencies for proving the accusation of a crime in a court of law] by the police in Bihar, according to the National Crime Records Bureau (NCRB).

“The biggest problem is that cases can take several years to be decided. It puts survivors, their families and civil society assisting them in the prosecution of traffickers at grave risk. We have formed voluntary Community Vigilance Committees, which alert villagers if they see anyone suspicious looking for soft targets to traffic,” says Singh via WhatsApp.

According to the NCRB’s Crime in India 2019 Snapshot, there were 2,914 children out of a total of 6,616 victims reported to have been trafficked. In Bihar, 180 people trafficked were for forced labour, 59 for domestic servitude and 50 for sexual exploitation and prostitution.

PM Nair, a career Indian Police Service officer and a national expert on human trafficking, emphasises the need for agencies – the police, the CWC, the district administration, the caregivers, and NGOs – in destination states to converge and liaise with the corresponding agencies in the source state, where the children have been returned.

“This lack of liaison has created a mess and it is impeding progress in stemming child trafficking,” Nair, who is currently with the Indian Police Foundation, tells IPS via WhatApp. “The post-rescue care is grossly inadequate and insensitive.”

“The Anti-Human Trafficking Units [an integrated taskforce of personnel from police and other departments, and the NGOs, in districts], together with Anti-Human Trafficking Clubs set up in the colleges across the country, Panchayats Against Human Trafficking [grassroots democratic institutions], and the NGOs including the Childline has the potential to be a dominant force against human predators and therefore all concerned must strengthen them and help the mission to end human slavery,” Nair adds.