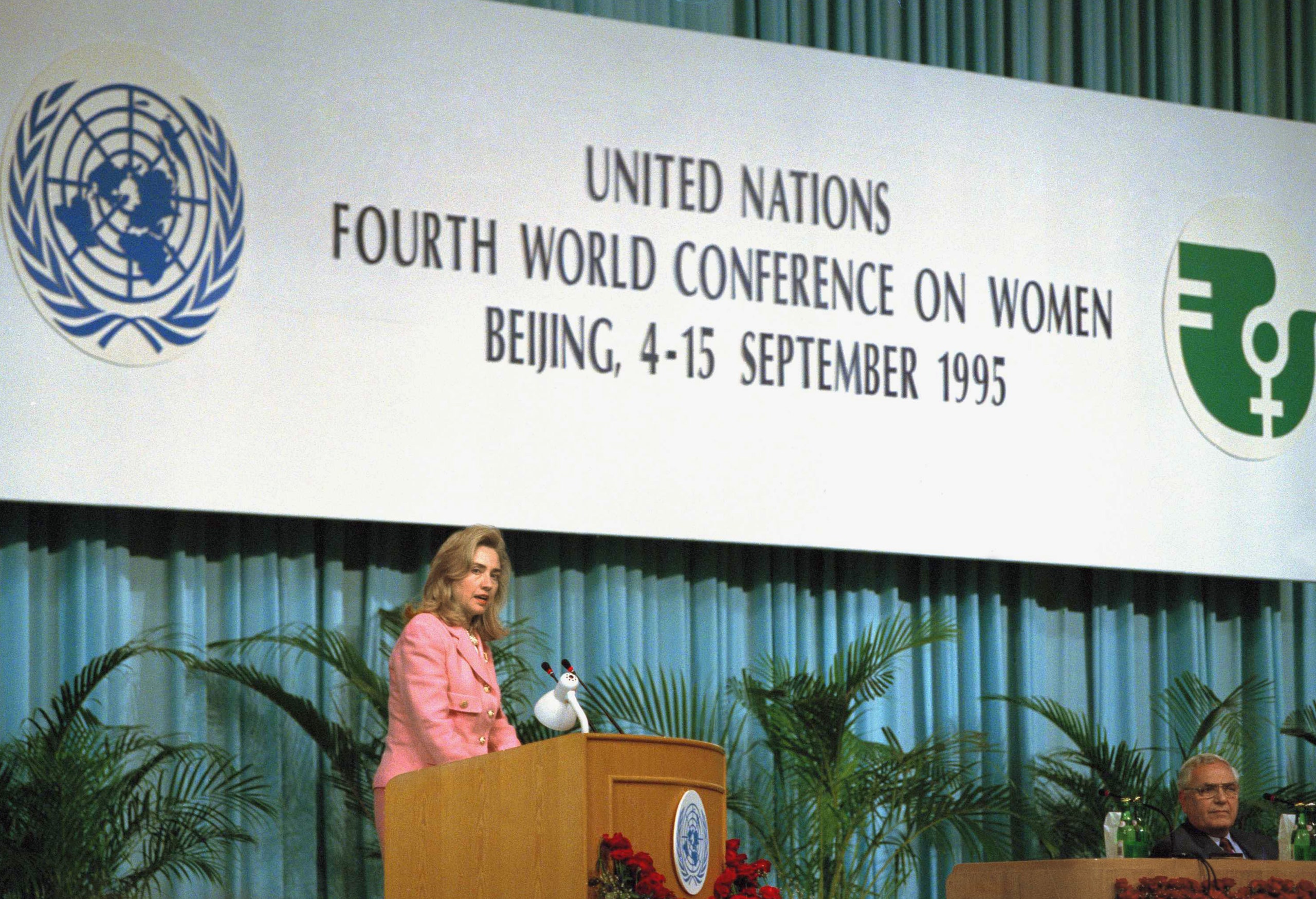 Very early on in the new Hulu docu-series Hillary, which is premiering today, Hillary Clinton gets testy. In a behind-the-scenes clip from 2016, we see her standing in a green room prepping to debate her then-opponent for the Democratic nomination Bernie Sanders. Her trusted advisor Huma Abedin, seated off to the side, whispers: “Are you going to wear those shoes on stage?” Clinton, looking down at her higher-than-normal heels, makes a perturbed face and replies: “Do you think anybody talked to Bernie Sanders about his goddamn shoes?” Laughter erupts and Abedin defends herself, explaining that she just wanted to make sure the former First Lady and Secretary of State was comfortable. “No more fashion comments!” Clinton chides her sarcastically and heads out onto the stage.

The docuseries itself is certainly not about fashion, but it is on many levels about the long history of judgment that Clinton has endured, from the time she was a young professional up until today. Judgment for being a certain kind of wife, mother, lawyer, and politician, but also judgment for her makeup, her hair, her clothes, her jewelry, her scrunchies, and yes, still, her shoes. It’s about the ups and downs of support and backlash, and about constituents whose constant refrain, as another advisor puts it in the film, was “be our champion, now go away.”

Clinton’s personal style has played a critical role in her life and in the way people have wavered between affection and rejection. Even in the ’60s when Bill Clinton introduced her to his mother, there was serious side-eye. In the docuseries, Clinton reveals that her soon to be mother-in-law didn’t approve of the way she dressed or her giant Coke bottle glasses. Once Clinton entered public life, she eventually ditched those glasses and traded in the Gloria Steinem gear for a little more Jackie O. polish.

As a successful lawyer, First Lady of Arkansas, and First Lady of the United States she dressed in soft, flowing dresses, only adopting sharp skirt and pant suits when she began serving as head of the task force on national health care reform in her husband’s administration. (That she took up a policy role as First Lady was another source of mass vitriol). She would later go on to become the poster woman for the power pantsuit. In Hillary, it’s very clear that as her life and career shifted, both positively and negatively, so too did her wardrobe choices.

One of Clinton’s most memorable suits was the pink one she wore when she made her famous speech to the United Nations Fourth World Conference on Women in Beijing in 1998. Standing at the podium in Shanghai, Clinton spoke for nearly 20 minutes and capped off her speech with the phrase that would go down in history: “If there is one message that echoes forth from this conference, let it be that human rights are women’s rights and women’s rights are human rights.” 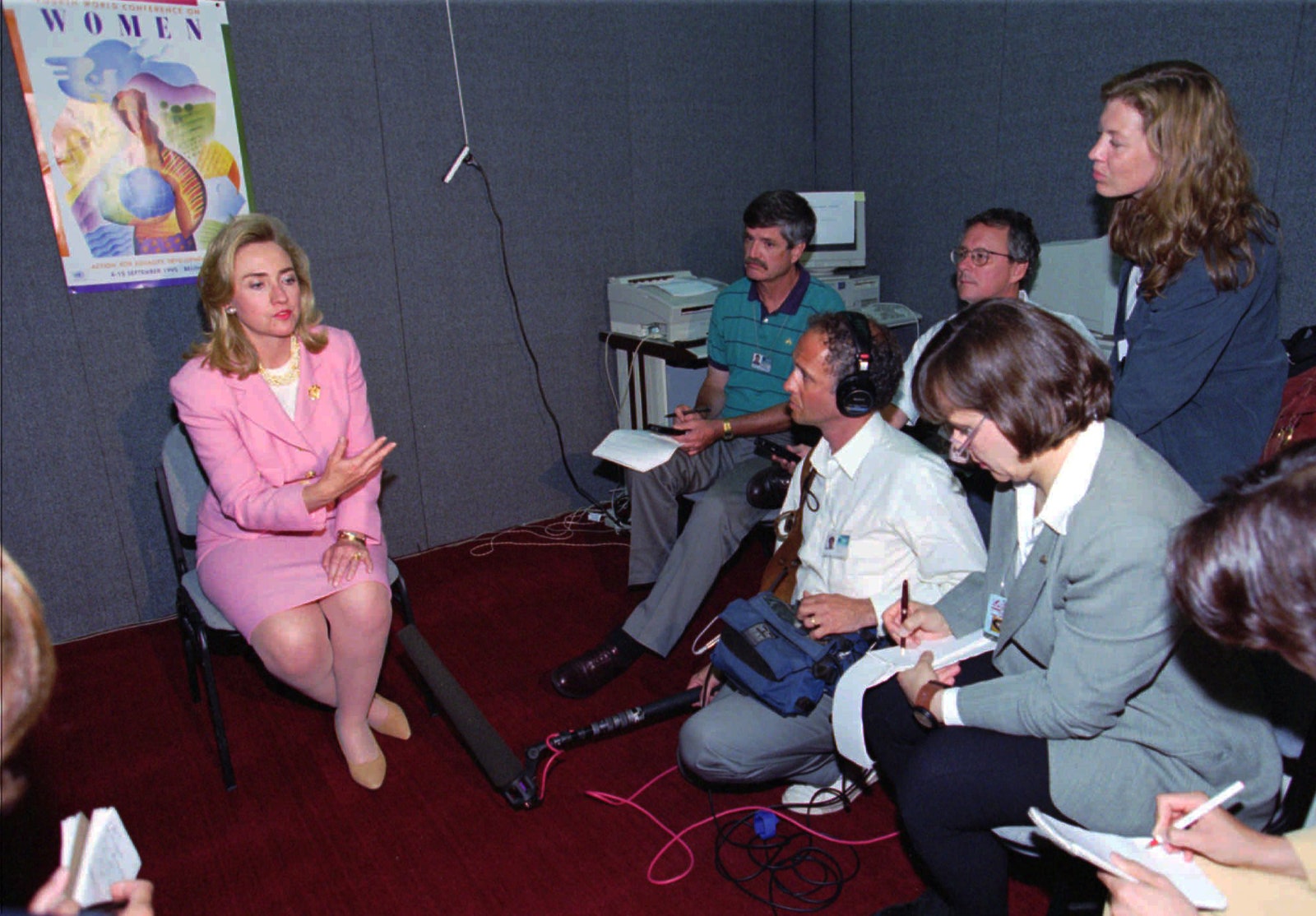 The pink tweed served to underscore Clinton’s point about putting women front and center on the world stage, both in an effort to protect them and empower them. I think of it as catalyst moment for women politicians who know they will be judged on what they wear and, in our new social media era, have learned to use this judgment to their advantage. Consider the Congresswomen who wore white to President Trump’s State of the Union address or the red Max Mara coat Nancy Pelosi wore to a contentious meeting with President Trump and Vice President Pence over the border wall and government shut down, or even the purple suit Clinton wore to make her concession speech, purple being the color you get when you mix Republican red and Democratic blue.

As we ready for another election of with old, white men, it’s hopeful to look back on Clinton’s legacy and the moments when she stood up and advocated for meaningful change. Just don’t ask her about her goddamn shoes.