Youth Demand a Voice in Call-To-Action on Child Labour 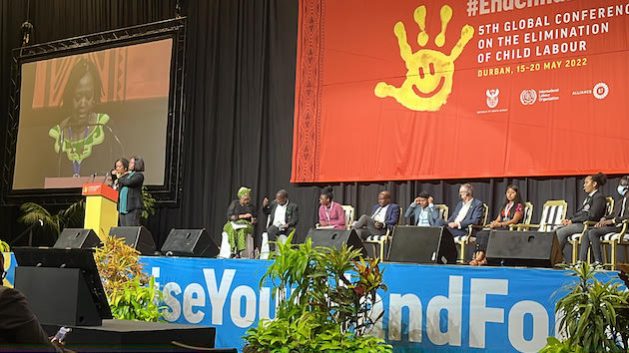 Delegates at the Youth Forum at the 5th Global Conference on the Elimination of Child Labour in Durban, South Africa, demanded that all forums in the future include their participation. Credit: Cecilia Russell/IPS

Durban, May 20 2022 (IPS) – Ashley has vast work experience. She has laboured by the sweat of her brow in the blistering sun on the streets of Guatemala, in the open fields on farmlands and indoors, toiling for long hours to the hum of a sewing machine.

Her work resume might be impressive to some – street trader, farmworker and tailor – but she, like 160 million children around the world, is trapped in child labour, working desperately to support her impoverished family and provide for her education.

“For most working children, it is very hard for us to express ourselves. All working children have different necessities, and most of their parents cannot supply these: clothing, health, and education. The root cause of child labour is poverty because it makes us as working children get out of our houses to risk our lives to be able to help our family,” she said.

“Working children are not done with formal education. They have not finished primary education because their families do not have financial resources. We need to go out and financially sustain ourselves economically. In other cases, third parties abuse them,” Ashely told delegates at the 5th Global Conference on the Elimination of Child Labour in Durban, South Africa.

“In my country and also the whole of Latin America, you will see every day how children are posted in parks, by the traffic lights, doing any kind of work in bad conditions.”

Ashley took time out from her work to share her story and join a small band of teenage peers and child labour survivors to make history, representing the children of 10 countries from across the globe at the conference, which runs in Durban, South Africa until Friday 20 May.

Like Ashley, across the globe in India, Amar Lala was born into a poor family and worked as a child labourer before being rescued by Nobel Laureate Kailash Satyarthi, a social reformer who has tirelessly campaigned against child labour and advocated for the universal right to education.

“I used to work in the stone quarry breaking stones every day and putting those stones into pots. We used to get hurt every day but had no chance to get to hospital to get treatment. I had no idea, and even my family had no idea what education was. I was the luckiest boy to get helped when the Nobel Laureate saw me and rescued me. I got the opportunity to study and decided to become a lawyer to stand for other children who are like me. Today, I can proudly say I am a lawyer standing in court, every single day fighting for children who have been exploited and are in child labour and bondage,” Lala said. 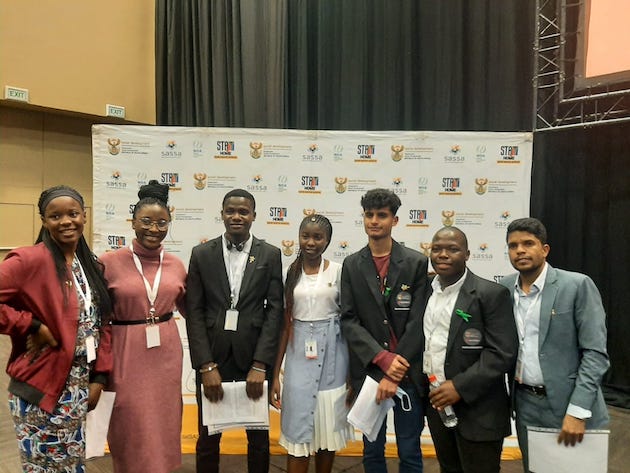 Nothing about us, without us, was a clear message at the 5th Global Conference on the Elimination of Child Labour in Durban, South Africa. These delegates were among those who drew up their own call to action at the conference. Credit: Lyse Comins/IPS

Children affected by child labour, like Ashley, Kabwe from Kenya, Mary Ann from South Africa and survivors like Lala, now 25, shared their stories before a group of children stood in unison to deliver the Children’s Call to Action, at the first global conference, ever, to include a platform for the voices of children impacted by child labour. The conference hosted more than 60 children and young people from different parts of the world, representing Africa, Latin America, and Asia. Organisers withheld the children’s full names to protect their identities and personal safety.

Representatives from the International Labour Organization, including Thomas Wissing of the Technical Advisory Cluster, chair of the UN Committee on the Rights of the Child, Mikiko Otami, SA Minister of Employment and Labour, Thulas Nxesi and other high profile international government, business and civil society leaders were present during the session, either physically or virtually.

In their call-to-action statement, which captures the expectations of children who attended the conference, they noted that the conference was being held at a “critical moment” when the world is seeing an increase in child labour, especially on the African continent, where 92,2 million children are entrapped, some 80% working in the agricultural sector.

In summary, the children said they were asking for:

Social protection and the provision of safe spaces for children during emergencies. Governments should make budgetary allocations to support and enrich children’s development, especially in poor, marginalised communities. Initiatives should be formulated, inclusive of children’s voices, to ensure that children’s rights and well-being are not violated or relegated to the background in emergencies. All states should adhere to the Convention on the Rights of the Child, the Sustainable Development Goal 8.7 and nationally adopted policies and laws on protecting the child.
Apportionment/ allocation of budget. Richer countries should provide development assistance to poorer countries, especially in emergencies. For example, the provision of safe spaces for shelters that can be used to empower children and their parents/caregivers on matters of child labour. Governments should commit to initiatives that enhance the appropriation of finances to maximise their use towards support for access to social protection, free quality public education, health care for all children and free sanitary towels to ensure full school attendance. Stakeholders must be empowered to demand accountability and transparency from governments at all times. Corruption and the misappropriation of funds will disallow the opportunities for free access to quality public education for all and diminish children’s abilities to pursue their dreams of becoming meaningful members of society.
Ensure the democratic representation of children and young people in the making and implementation of key decisions that affect them the most at all times. Organisations such as student unions, child-based groups and civil society organisations must engage with children to find solutions.

“We children and young people of the world…are saying ‘no to child labour’. We are asking governments and all other actors to respect and consider our voices to eradicate child labour by 2025. We hope that this conference does not become one of just words, but of actions,” the children said.

Commenting on the children’s involvement in the conference, Otami said they had helped provide a clear understanding of what the world was fighting for and the need for the holistic implementation of children’s rights.

“Hearing the voice of the children is very important. We talk about evidence-based research – what the children are experiencing and thinking is part of the evidence,” she said.

Wissing said children’s participation had been discussed at previous conferences, but the South African government had decided that it was ready to give children a platform to speak to the world’s policymakers.

“Children’s rights are not something you can negotiate according to local conditions or problems. These are aspirations that need to be put into action. You look at these conventions (on the rights of the child and the eradication of child labour), but if you don’t implement them, we will be discussing the same thing in 50 years. We want to eliminate child labour,” Wissing said.

He said the ILO was working with trade unions to lobby businesses for decent wages and working conditions for parents so that their children could go to school.

Former Child Labourer, now Lawyer, Passes Light of Freedom to Others
Technology for Tracing the Work of Child Labour Could Help End the Practice
Child Labour: No Quick End to Children Trapped in Tobacco Production